A Different Kind of War

View source
watch 01:56
What is A Different Kind of War?
Do you like this video?
Play Sound

A Different Kind of War

In the first part of the case, you play as Jack Kelso. Jack is shown outside the Los Angeles International Speedway, preparing to investigate a number of exterminators around LA after Leland Monroe informed him that the serial arsonist was a bug-sprayer.

The next section of the case takes you back to the previous day. You play as Cole Phelps again, last playable in A Walk in Elysian Fields (or Nicholson Electroplating, a DLC case). Cole and Biggs are called in by Rusty Galloway to investigate the murder of Dr. Harlan Fontaine at his home office by one of his patients, as well as the kidnapping of Elsa Lichtmann. Phelps must examine the crime scene for clues. The list of clues below is what you need to obtain in order to continue on to the next part of the case:

Cole quickly comes to the realization that Leland Monroe was building firewood houses in the path of the future freeway. The houses would be built for next to nothing, and a false, higher value would be declared by California Fire and Life, with Curtis Benson's help. The federal government will reclaim the land to commence with the freeway's construction, and the improved value will be paid to Leland Monroe and his associates. Eventually, the G.I.'s that invested in and/or bought a house would get their money back. Cole also comes to the conclusion that Fontaine had forced his patient to burn down the houses under the orders of Monroe.

The third section of the case has you play Jack Kelso again. Kelso checks out the bunkhouse at the old Rancho Rincon. It is located in the hills, north of Downtown, Los Angeles. Approach the house and kick one of the many doors down.

-Behind the workbench is a blue blueprint pinned against the wall.

Jack soon realizes that the arsonist and occupant of the bunkhouse is his and Cole's former fellow Marine, Ira Hogeboom, responsible for burning out a cave of innocent civilians during the war, under Cole's orders. He had since lost his mind and gone to Dr. Fontaine for help. Fontaine, however, working with Leland Monroe, had Ira burn down the homes in the Arson cases The Gas Man and A Walk in Elysian Fields, killing two families in the process. When Fontaine knocked out Elsa Lichtmann in his office, Hogeboom burst in and strangled the doctor. Jack, after finding the map of the Los Angeles River Tunnels, comes to the conclusion that Hogeboom resides down there with Elsa as his hostage.

Jack phones Assistant D.A. Petersen and Phelps and tells them to meet him at the Los Angeles River Tunnels entrance near 1st St. in the Warehouse District of Downtown.

After Jack tells the Assistant D.A. and Phelps to meet him at the tunnels, Cole and Biggs receive a broadcast over KGPL about a police pursuit with Patrol units pursuing Kelso. At the end of the cutscene, Phelps and Biggs are shown on Olive St. in Downtown, between The Biltmore Hotel and Pershing Square. Jack speeds by them with police in pursuit.

The final section of the case and game is played from the perspective of Jack Kelso. Jack, Phelps, and Biggs reach the river tunnels in the pouring rain. Petersen meets the trio there. As Cole and Jack enter the tunnels in a cutscene, the Police Chief and Detectives pull up to the scene, intending to arrest everyone there. Petersen quickly explains the situation and blackmails the Chief with the information he has, explaining that everything that's going on goes as high up as City Hall and implies that the latter might be involved. The Chief accepts Petersen's deal.

Next, the final and largest shootout of the game takes place. Take out all of the men in the tunnel system who are in pursuit of Ira, who is armed with a Flamethrower and wearing his Marine uniform.

You will eventually get to an ammunition storage room in the tunnel and be able to pick up the Flamethrower, BAR, M1 Garand, or Thompson. You may use the Flamethrower to kill at least one enemy if you haven't received the Roscoe and Friends Achievement/Trophy yet. However, Jack will pick up the flamethrower uncommanded (without the player pressing the "pick up weapon" key), and will not drop it using the "drop weapon" key. The Flamethrower turns out to be a poor weapon due to its short range, and while dying restarts the mission just before this point, quitting to the main menu throws the character back to the beginning of the car chase. This means the flamethrower cannot be dropped and almost guarantees a quick death, so players are wise to avoid it altogether.

The next step is a ladder to the right of the room with the weapons. Once Jack heads down the ladder, the water will rise. There will be two catwalks (can be seen before Jack descends) with only their railings visible. Walk on one of these catwalks in order to get to the other side; otherwise, you will drown. It is better to walk on the right one as it will be easier to avoid gunfire. After you climb another ladder the last six enemies will be waiting for you. Be very cautious in this final area; there is an area at the far end where it is possible to immediately die by falling off of the ledge.

After progressing through a small tunnel, a cutscene will start where Jack drops his Flamethrower and finds Elsa and Ira Hogeboom, clearly insane, doesn't want to hurt Elsa and realizes that Jack is his former Marine Sergeant. Cole quickly joins the three and Ira tells Cole that he was the reason that he went insane, claiming that Cole's orders for him to burn out a cave in the war - which turned out to be a civilian hospital - caused him to lose his mind. Cole helps Elsa through the rising water, claiming that he needs Ira for his case. Jack, however, disagrees, explaining Ira has suffered enough and executes him out of mercy.

Finally, Cole and Elsa reach a street grate above the rising water in the tunnel, with Jack close behind. As the torrent rises and becomes more violent, Herschel pries open the grate and hauls Elsa and Jack up with the help of Cole. Before Cole Phelps could jump up himself, however, a violent gush of water sweeps him to his death just after he utters one last word: "Goodbye".

The water shoots out of the street grates, throwing Jack, Herschel, and Elsa onto the ground. Jack stands in the mud, looking up at the rain while Elsa breaks down crying.

Later, Phelps' funeral takes place in a cutscene at Chichester Chapel. Cole's wife and two daughters are in attendance, along with previous partners and associates. Roy Earle gives a eulogy at a closed, American Flag-draped casket, with Cole's picture next to it. It is implied that Petersen insisted, in his deal with the Police Chief, that Phelps be exonerated of all previous accusations of wrongdoing. This implication is further reinforced by the handshake that Petersen gives Roy after he finishes his eulogy and the fact that the Mayor, the Chief, and Roy all got out of the situation unscathed, with Monroe and Fontaine taking the fall. When Earle denounces the accusations made against Cole with regards to his affair, Elsa yells "Swine! You belittle his memory!". Jack tells Herschel to go to her. Just before he leaves, Herschel tells Jack the latter was never Cole's friend. Jack replies with "I was never his enemy", with Herschel responding "I think he knew that, Jack".

After the credits roll, there is a final flashback showing the events just prior to the robbery of the ship containing government-issue morphine. Courtney Sheldon tells the rest of Cole's Marine Unit present that they could make a lot of money by selling morphine on the street. Most of them are jealous of Cole's success as a policeman and are bitter that they are not being recognized as heroes. Jack, opposed to the theft, eventually says that everyone already were heroes to him, and even though Phelps became famous from a fluke, they are all acknowledged by him and should recognize that themselves. He concludes saying if the others take part in the robbery, everyone will no longer be heroes to him. However, the robbery still takes place, laying the foundation for the entire plot.

"The Doctor is dead, Benson is finished and Leland Monroe is going to limp his way into a jail cell. Safe to say the Suburban Redevelopment Fund isn't going to be around for much longer. All that's left is the guy who has Elsa, the maniac who burned the houses for Fontaine. I know he's a cowboy, I know he works pest control, but otherwise he's a nobody". 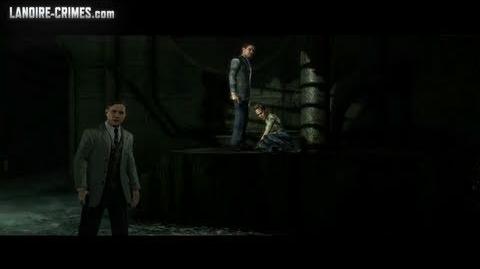 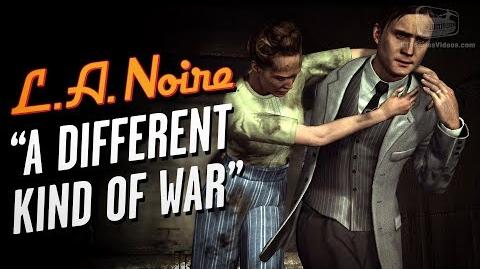 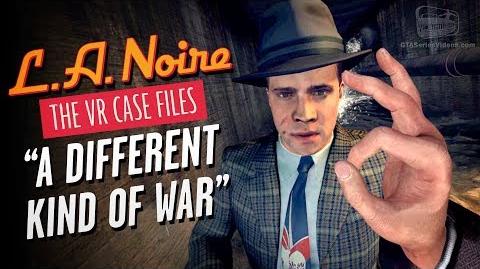