A Slip of the Tongue

View source
watch 02:37
What is A Slip of the Tongue?
Do you like this video?
Play Sound

A Slip of the Tongue

A Slip of the Tongue is a Traffic case in L.A. Noire. It was a pre-order bonus from Wal-Mart in Canada and the US and Play in the UK. According to Play.com, it came with the game soundtrack. JB Hi Fi Australia and New Zealand also have this case exclusive to JB Hi Fi pre-orders. It is now a story case in the The Complete Edition of the game.

A seemingly run-of-the-mill car theft ends up sparking an explosive investigation into the largest auto fraud racket the city has ever seen.

Captain Leary informs you that a stolen vehicle from the hot sheet has been spotted.

When you get there, a short cut-scene will occur before you'll have to chase the driver. Disable his vehicle before he is stopped by uniformed backup in order to earn the Nowhere in a Hurry Achievement/Trophy.

This is where you get the first pink slip for the Racing For Pinks Achievement/Trophy.

Once you get there, you'll be greeted with a sales pitch from the owner, Richard Coombs. He'll tell you not to take another step, but you'll have to go to him in order to proceed. After a short cut-scene, you follow him into his office where he'll give you two new clues:

This is where you get the second pink slip for the Racing For Pinks Achievement/Trophy.

Before leaving, use the nearby gamewell or just get in your car to use the police radio.

When you arrive, you'll discover that the registered address is an empty lot.

Speak with the watch commander before going to interview James Belasco in interview room 2.

Before you get to ask him questions, he'll give you another clue:

When your interview is finished a cutscene will occur where Ray Pinker will give you another clue:

Go towards the entrance, and the watch commander will stop and talk to you. He'll tell you that Jean Archer was seen at the Western Union less than a minute's run from Central. Run out of the station and turn left. Cross the road at the intersection, and turn left when you get to the other side. From here, just keep running straight.

Alternatively, get in your car and drive, or ask Bekowsky to drive. Be aware, it is possible to miss her, and doing so will only allow you to get a maximum of 4 stars for this case.

Approach Archer at the counter and question her.

After this interview, if you correctly branch all questions, you receive the Achievement/Trophy Femme Imbécile.

Go into the building and speak to Gordon Leitvol. Do not do this early, as the interview will not begin.

After your conversation, Leitvol will let you see his ledger. Select any row where Bigelow was the customer.

Prepare for a shootout. Take out the goons on the first floor before going up to the second floor. You can get the Chop Shop Achievement/Trophy if you kill at least one of the goons with the engine block that's hanging from the ceiling in the center of the room. You'll find Steven Bigelow and the following clues in his office:

"Report of a stolen vehicle, 6 West Second Street. If the registration has been circulating on the Department hot sheet, that means the suspect didn't change the plates, didn't make any attempt to conceal the vehicle - a beat cop spotted it sitting in the driveway. Something doesn't add up. We have the full details of the car, so finding out is as simple as paying a visit."

"Well, some people would say that my cars are a steal... that's a joke, son."
―Richard Coombs

"There are at least four dead men in this warehouse. A couple more punks won't make for that much extra paperwork. We'd be doing the legal system a favor."
―Cole Phelps 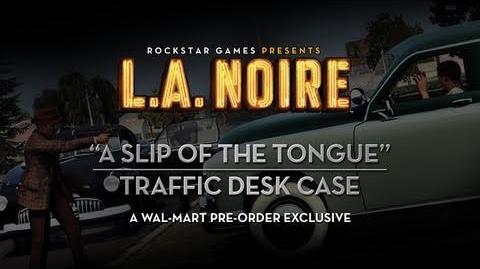 L.A. Noire "A Slip of the Tongue" Traffic Case Video 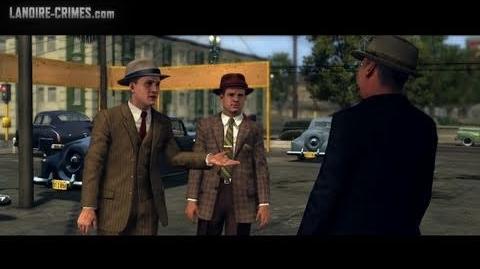 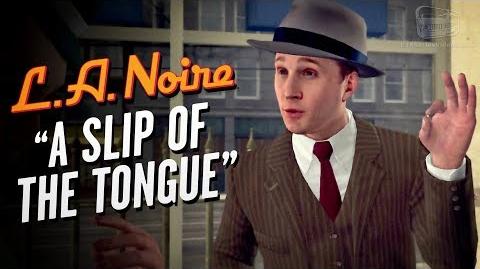 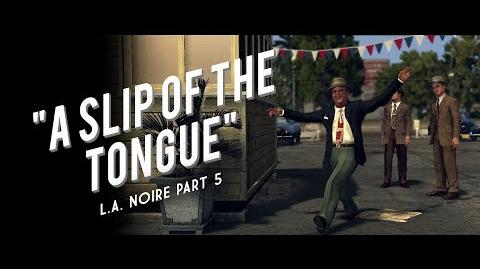 L.A. Noire Part 5 - A Slip of the Tongue
Commented Walkthrough
Community content is available under CC-BY-SA unless otherwise noted.
Advertisement