watch 01:42
What is A Walk in Elysian Fields?
Do you like this video?

A Walk in Elysian Fields

A Walk in Elysian Fields is an Arson case in L.A. Noire.

"You guys better see this, I hope you have strong stomachs."
―Malcolm Carruthers

Head to the crime scene. The coroner will greet you and tell you to follow him. Walk with him into the house and turn right. You'll see the victims and a cutscene will start.

Doing this will lead to Biggs effectively fleeing the house.

Go after Biggs and trigger the next cutscene where Biggs tells Cole of his time in the Marines. Cole tells Biggs that this family was also on the winners list that he read at the travel agency in the previous case. Biggs says he has no intention of arresting the culprit; only killing him.

After the cutscene you can go look for clues.

Once Phelps is done interrogating the neighbor, the latter will run back into the house to retrieve a copy of one of the Elysian Fields promotional flyers. A cutscene will trigger and Biggs will give you clues about the origami crane, check it out.

Next, use a gamewell for the location of the main office of Elysian Fields Co.

After using the gamewell outside of the Morelli home, head over to Rancho Escondido. Upon arrival, a fight will break out. Phelps will then have to fist-fight with two enraged locals who are brawling with police. When the fight is over, inspect the house’s foundation; Phelps will be able to examine one of the bricks. After looking over the brick, Phelps will place it down and trigger the collapse of the entire foundation. You will now have to head on over to Elysian Fields.

Go to Elysian Fields Co. and interrogate Leland Monroe (after getting past his unhelpful secretary, Miss Cansino).

You can earn the Huckster Achievement/Trophy by calling Monroe's lie on the "Promotional travel contest" or "Rancho Escondido fire" questions and providing the correct evidence.

After the interrogation a cutscene will trigger. Leland says he will give Cole and his partner a list of names of flyer distributors. On the secretary's desk, tap your finger on Herbert Chapman (Chapman was a POI in the previous case). Use a phone to call in for the address of Chapman’s apartment (you can find one in the office area directly opposite from the receptionist in the lobby).

When you regain control, you receive Chapman's address from KGPL. Head over to his apartment and check the trunk of his car to find a mosquito coil, some ammunition and some flyers. After investigating all three items you will get a cut scene, followed by a car chase. Ram your car against the side of the tram that Herbert has hijacked until the panel falls off. After that, stay along the side of it until your partner shoots the tram's wheel out. Herbert will then get off the tram and shoot at you. Shoot him dead and the case will end. Phelps will tell Biggs that he cannot imagine Chapman and Monroe working together. Biggs agrees, but explains that the evidence is better for Chapman.

If Phelps interviews Monroe successfully, Captain McKelty will say Phelps "put up a considerable risk stopping the trolley and probably saved a lot of lives". In addition, he will say that the Arson Desk had its eyes on Chapman for a very long time. He will say that if this keeps up, Phelps might call Richard Nixon a crook next and walks away.

If Phelps interviews Monroe poorly, McKelty will be angry at Phelps "starting riots", "harassing pillars of the community" and "wantonly destroying the property of the LA Transit Authority". McKelty then goes on to point out that even if Phelps is "not happy slumming it in this squad", it's no excuse and tells him to either get "squared away" or hand in his badge. McKelty puts him on street duty "until further notice".

In any case, a cutscene follows as Elsa learns that she is to receive a large settlement in the death of a friend who'd named her as a life insurance beneficiary. When Cole learns Elsa's friend died on an Elysian Fields project, he convinces her to reject the settlement and get Jack Kelso, now an insurance investigator, to look into it.

"Arson finally puts two cases down in the clearance column and this is our reward. A family of four burned to death in their home on North Hobart Boulevard. No preliminary report from Lynch and the fire department investigators, so this could be a tragic accident. But given the things Biggs and I have seen in the last week, we'll be searching for any connection to the Suburban Redevelopment Fund." 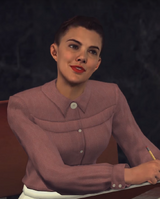 Cynthia Graham, Leland Monroe's secretary on the ground floor.
Add an image to this gallery 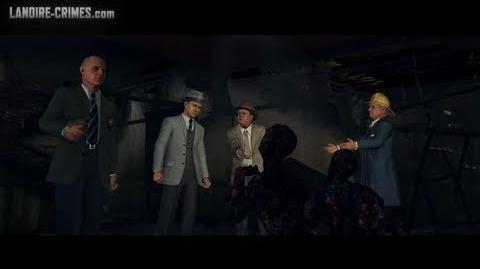 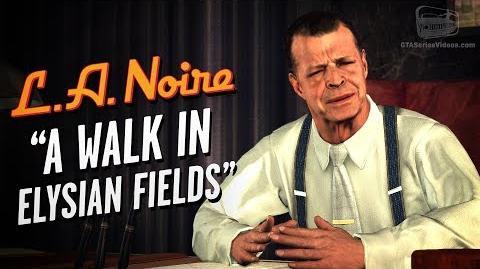 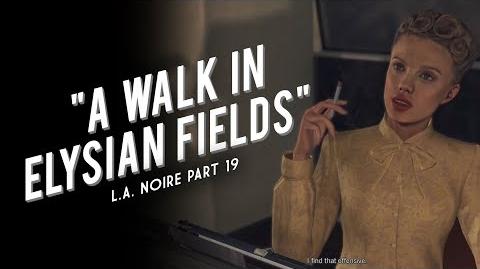