"Psychology is a powerful tool... in the right hands, of course."
―Harlan Fontaine

Dr. Harlan J. Fontaine, PHD is a central character and one of the main antagonists of the Arson desk. He is a clinical psychiatrist who is featured several times on the front page story of the Los Angeles Inquisitor. Throughout the game's events, the majority of his appearances are in newspaper flashbacks.

Much of Fontaine's past is unknown, though his accent and French surname suggests he is from the southern United States, specifically Louisiana. Fontaine majored in psychology and medicine, establishing himself as a well renowned clinical psychiatrist in Los Angeles. Fontaine specialised in cognitive and abnormal psychotherapy. He furthered his career and reputation as a college professor and by providing his professional services to high profile celebrities of LA, as well as war veterans.

After teaching a psychology lecture, Fontaine met former Marine and medical student Courtney Sheldon who expressed a strong interest in psychology - particularly to help treat Post Traumatic Stress Disorder. Fontaine agreed to provide therapy for Sheldon's friend Ira Hogeboom in exchange for Sheldon taking a part-time job at one of Fontaine's clinics. Over time, Sheldon and Fontaine developed a mentor-student relationship, with Sheldon loyally following and trusting Fontaine. While treating Ira Hogeboom, Fontaine was unable to fully relieve him of his trauma, but was able to keep him susceptible to manipulation through morphine and hypnotherapy - something Fontaine would later exploit.

Sheldon eventually turned to Fontaine in a moment of crisis, confiding in him his involvement in the SS Coolridge robbery and information regarding the stolen surplus Morphine distribution with the Cohen Crime Syndicate. Fontaine provided a solution for Sheldon's predicament and for both of their benefits. Fontaine offered to take the morphine off Sheldon's hands, promising to distribute it legally to medical facilities, and that in return he would be able to reinvest money into the a plan to build houses for returning G.I.s. Sheldon confidently accepted Fontaine's offer, as it not only solved his problem but would provide benefits for his war buddies.

In actuality, Fontaine became a drug dealer the whole time, discreetly selling the morphine to students and addicts by prescribing them as medication. According to Earle report in Monroe's office, Fontaine also made deals with Cohen Crime Family, selling drugs to the mafia. With the proceeds, Fontaine was able to invest in the Suburban Redevelopment Fund, becoming part of Leland Monroe's criminal syndicate to extort millions of dollars from the government. Sheldon's name was also added to the Fund's list of managerial stakeholders, as Sheldon had originally donated the morphine to Fontaine.

Two prominent patients of Fontaine's were Elsa Lichtmann and Lou Buchwalter, both German exiles who fled to America. While Fontaine treated Elsa's drug addiction, he offered Lou a job to work at Elysian Fields Development to build houses - appropriate, as Lou was a carpenter. However, Fontaine was using Lou for the benefit of the Suburban Redevelopment Fund and was fully aware that the houses were fraudulent and unsafe; hence, he was partially responsible for Buchwalter's death. Fontaine visited Elsa at The Blue Room to inform her of Lou's death, but rationalized it as an "industrial accident".

"You may well be fascinating to speak to, Detective. But I charge by the half hour, and I guarantee you couldn't afford me."
―Harlan Fontaine

Over six months later, Fontaine went with Sheldon to Hollywood Police Station, acting in his defense and vouching for his innocence in the LAPD's stolen morphine investigation. Despite Detective Phelps' evidence, Police Commissioner Worrell (also member of the Suburban Redevelopment Fund) arrived and interrupted the interview, thus protecting them from prison.

While Monroe was facing the predicament of several holdouts, Fontaine offered a solution to ensure acquisition of the estates. Monroe rigged a promotional travel contest to ensure these families won a prize of a weekend getaway to Catalina Island, allowing Fontaine an opportunity to have Ira burn the homes to the ground. Fontaine suggested Ira burn down the houses as a form of treatment to help confront his past. Although the houses successfully burned down, allowing Monroe to acquire them, the Sawyer and Morelli families died in the fires because they had cancelled their trips, much to Monroe's shock and displeasure. Ira, guilt-ridden over the deaths, was driven further into insanity and was angered that Fontaine had used him, causing him to no longer fall under Fontaine's control.

Fontaine was eventually confronted by Sheldon at his office, the latter naïvely informing him of the Suburban Redevelopment Fund conspiracy and expressing his complete shock. Fontaine, however, easily played on Sheldon's trust. Tricking him into thinking he was innocent, Fontaine used the opportunity to inject and overdose Sheldon with morphine, killing him. After leaving Sheldon's body in an alleyway for Cole Phelps and Herschel Biggs to discover, Fontaine met with Monroe at a restaurant to discuss damage control. Monroe warned Fontaine of Jack Kelso's investigation of the Suburban Redevelopment Fund and finally told him to dispose of Ira.

Fontaine was later visited by Elsa, who explained her recovery from her addiction and mentioned Cole and Jack, causing Fontaine to stutter on his words. Catching him off-guard, Elsa confronted Fontaine by stating she knew of his involvement with Monroe and that he had suggested Lou worked at the housing site; insinuating that Fontaine was responsible for Lou's death.

Finding himself cornered and exposed, Fontaine played up his innocence and attacked Elsa, striking her on the forehead with a crystal ball, knocking her unconcious. As he prepared to kill her to conceal his corruption, Ira Hogeboom arrived and witnessed the whole attack. In a fit of rage, Ira stormed in, grabbed Fontaine by the throat, and strangled him to death, saving Elsa, avenging Sheldon and retributing his evil deeds, and for retaliation against his manipulations. LAPD detectives Cole Phelps, Herschel Biggs, and Rusty Galloway investigated Fontaine's murder, and Phelps and Biggs discovered that Fontaine kept a stash of morphine in his office, as well as Fontaine's involvement with the SRF, including a freeway map, as well as blackmail papers.

"You certainly are a cold character, Harlan."
―Leland Monroe

Fontaine is one of the most cold and ruthless characters in the game, obsessed with power and manipulation. He constantly utilizes people to further his ends, as seen by his keeping Elsa Lichtmann addicted to drugs in order to investigate the breakdown of an addict and using Lou Buchwalter for the Fund, causing his death. He is also a master at manipulating people, demonstrated by how he convinced Courtney Sheldon to give him the stolen army surplus morphine in blatant abuse of his trust. Furthermore, he manipulated Ira Hogeboom to assist in the Fund's nefarious plans.

"I've taken quite an interest in Mr Sheldon. So you can understand why it pains me to see him lambasted unnecessarily. Please leave us be."
―Harlan Fontaine

Fontaine speaks with a certain eloquence and a very flowery and educated vocabulary; he uses attractive words to emphasize his intelligence. Fontaine has something of a large ego, taking pride in his work and intelligence. He is extremely confident that things will always play out the way he plans them, and undermines the intelligence of others, viewing them as submissive and naive puppets almost to the point of malignant narcissism. He has an unnaturally calm demeanor, always speaking with a calm, disarming southern accent even in the most tense of situations, never revealing his emotions or intentions. Fontaine is also condescending and patronising, as demonstrated when speaking to Phelps in Manifest Destiny.

"A Walk in Elysian Fields"

"A Different Kind of War" 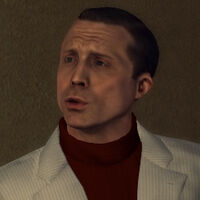