Harold "Harry" Caldwell is a minor character in L.A. Noire. He is an LAPD detective in the Burglary department, who is implied to have been Cole Phelps' partner during the unseen six month period he worked there before being promoted to Homicide.

Nothing is known about Caldwell's life before joining the LAPD. Among his investigations, Caldwell was assigned to investigate the SS Coolridge robbery, along with McManus. Caldwell deduced that the robbery was an inside job, and that the perpetrators were either dock workers or passengers on the ship. However, even after six months of investigation, Caldwell was unable to track down any of the stolen supplies or substantially narrow down the possible suspects.

The Vice case "Manifest Destiny" is the only time in the main story where Caldwell is relevant. Cole and his current partner, Roy Earle, went to investigate a shooting at the 111 Club; the club's owner, Eddie McGoldrick, who was killed alongside Bittleston and Bowe, fought alongside Cole in the Marines. On the premises, he found items that had been stolen from the SS Coolridge, such as cigarettes and BARs, and quickly realized that his old unit was responsible for the robbery.

Phelps later spoke to Caldwell at the Hollywood Police Station for information on the heist. Caldwell assisted Phelps and Earle in the investigation, showing them the ship manifest listing of all the stolen goods, and the list of passengers that were onboard when the goods were stolen. Caldwell later proceeded to the club to inspect the stolen supplies and solve the case. When asking Roy Earle for assistance while inside the station, he'll mention that Caldwell and Phelps used to work together.

Caldwell also appears during the street crime "Against the Odds." Phelps meets Caldwell in front of a bookmakers, where he briefs Phelps of the situation. Caldwell had received a tip that a bagman named Rampley was going into the bookmakers to collect money that he won in a fixed horse race. Caldwell stated that he didn't care much about Rampley, but hoped that he could lead the detectives back to his boss. He asked Phelps to tail Rampley back to his boss, which Phelps did successfully. However, they both soon discovered and opened fire on Phelps, and he killed both of them in the ensuing gunfight.

Very little time is spent on Caldwell's character, though it can be gleaned from his and Phelps' few showcased interactions, which are all seamless and casual, that the two presumably worked well during their collaboration in Burglary and consider each other decent friends, at least insofar as being compatible professional associates; in this, he is likely to be a generally well-natured and honest policeman. Phelps is the only person heard referring to him as "Harry," and when the Talk command is used on him, he will say that he and Phelps have "catching up to do." 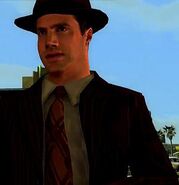 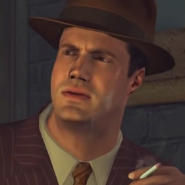 Add an image to this gallery
Retrieved from "https://lanoire.fandom.com/wiki/Harold_Caldwell?oldid=66612"
Community content is available under CC-BY-SA unless otherwise noted.