Ira Hogeboom was a character in L.A. Noire. Ira was a mentally unstable veteran working for a pest control company in Los Angeles at the time of L.A. Noire.

Hogeboom was born in Oklahoma. His surname implies he is of Dutch origin. He and his father migrated to California to escape the hardships of the Dust Bowl, during which his mother and younger brother died from starvation. They moved to Los Angeles where his father worked as a stunt double for low budget movies. Ira trained and worked as a gas fitter but was drafted into military service due to the U.S.'s involvement in the Second World War, serving as member of the Sixth Marines under Lieutenant Cole Phelps and Sergeant Jack Kelso. Ira fought in the Okinawa Campaign, and due to his experiences as gas fitter and aptitude in mechanics plus his large stature, he was appropriately placed on flamethrower detail.

While raiding Japanese hideouts, Ira's company encountered a cave and was ordered by Phelps to torch it. Ira ran ahead and set the cave ablaze, however, they realized too late that the cave was actually a makeshift hospital for Japanese civilians. Upon seeing the agonized men, women and children burning to death, Ira became distraught and horrified by his actions, having a complete mental breakdown where he even attempted killing Cole. However, his flamethrower was out of fuel, and Ira was promptly dragged away by his fellow troops as the civilians were euthanized. Ira spent the rest of the war inactive due to battle fatigue. His father died in November 1945, so he came home to live on his father's property.

After the war, Hogeboom returned home suffering from extreme post traumatic stress disorder, haunted by memories of the atrocity. At the recommendation of friend and fellow Marine, Courtney Sheldon, Hogeboom sought treatment from renowned psychiatrist Harlan Fontaine. Fontaine used psychotherapy and Morphine, although Ira was still unable to come to terms with his trauma. Nonetheless, Ira was physically fit for work and secured a job as a bug sprayer for the Westlake Pest Control Agency and resided in a house on Rancho Rincon.

Ira's fragile mind combined with morphine and hypnotherapy made him susceptible to Fontaine's manipulations, who suggested to burn down certain houses as means of treatment, telling him that it would help confront his past. Ira did so by sabotaging the houses' water heaters and framed Matthew Ryan for the arsons. In actuality, Fontaine was exploiting Ira's broken mind and arsonist experiences for the benefits of the Suburban Redevelopment Fund.

However, despite Fontaine's and Monroe's planning, two of the houses were occupied, and Ira could hear the screams of the Morelli family. Guilt-ridden over their deaths, Ira was driven further into insanity and angered that Fontaine had used him, and consequently broke free of his control.

To absolve himself of guilt, Ira began to rationalize that death was a transformation into something better, a higher form of existence, allowing him to kill without remorse. Ira went to confront Fontaine and arrived in time to save Elsa Lichtmann from being murdered by Fontaine by strangling and breaking Fontaine's neck in retribution for his evil deeds and in retaliation for Fontaine's manipulations. Ira then abducted the unconscious Elsa intending to take her to safety.

"Don't cry Miss, Sergeant Kelso has come to help ease my way. I was proud to serve with you, Jack."
―Hogeboom's last words.

Donning his Marine uniform and armed with his flamethrower, Ira took Elsa to the River Tunnels, fending off Monroe's henchmen and corrupt detectives. Kelso and Phelps arrived to rescue Elsa, however, Kelso's attempts to reason with Ira failed. Lamenting and acknowledging the tragic set of events, Ira allowed Phelps to take away Elsa. Ira saluted Jack as he performed a mercy kill, finally freeing him from insanity.

Throughout his time in Okinawa, Ira was a keen and upstanding Marine, though his actions in the atrocity reduced Ira to a broken shell of his former self. Fontaine diagnosed Ira as a paranoid schizophrenic with anti-social psychopathic tendencies. Ira's memories of the war haunted his sleeping and waking moments, unable to tell if he was still fighting in the war. As a result, he was unable to readjust to civilian life and was a constant danger to himself and to others.

Despite his overwhelming insanity, Ira also wanted to alleviate his pain and atone for his mistakes. It is likely that Ira developed his obsession with origami cranes due to the legend that making 1,000 grants a free wish, thus giving him a chance at redemption. He also hoped to secure a samurai sword, and bring it back with him after the Okinawa campaign. However, after being used by Fontaine, Ira could not let go of his Marine mentality. Haunted by death and sadness, Ira sought comfort in the idea that there is a better existence beyond death hence proclaimed to "fight for God", allowing him to fight and kill without guilt. Ira becomes a reluctant villain driven by his insanity. Though arguably, Ira achieved some amount of peace and redemption from helping Elsa, despite his tragic end.

Hogeboom salutes Kelso in the sewer tunnels before his execution. 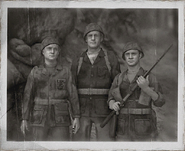 A photo of Ira, Jack and Cole. 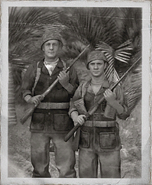 A photo of Ira and Jack. 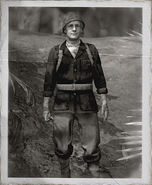 A photo of Ira. 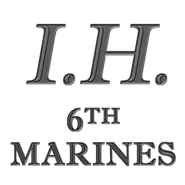 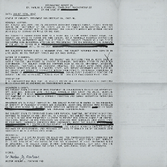 Ira's psychiatic report by Harlan Fontaine, dated August 15, 1947.
Add an image to this gallery
Retrieved from "https://lanoire.fandom.com/wiki/Ira_Hogeboom?oldid=65406"
Community content is available under CC-BY-SA unless otherwise noted.