Captain James Donnelly is a major character in L.A. Noire. He is Captain of the Homicide Department of the LAPD.

James Donnelly was born in 1905 to an Irish family. In 1921, he joined the LAPD at the age of 16, and eventually became a Captain. As Captain, he presides over handling the affairs of the Homicide department and assigns detectives to various murder cases, occasionally providing background information if it is available.

Cole Phelps first met Cpt. Donnelly after his arrest of Edgar Kalou. Surprised that a simple Patrol officer had beaten his Homicide detectives at a murder investigation, Donnelly allowed Phelps to conduct the interrogation of Kalou. After successfully extracting a confession from Kalou, Donnelly applauded Phelps, acknowledging his efforts during the war and his show of initiative. Soon after, Donnelly requested Phelps' promotion to Detective, which resulted in his promotion to Traffic.

Partnering Phelps with Rusty Galloway and replacing retired Detective Floyd Rose, Donnelly sent the two to investigate Celine Henry's murder. Subsequent cases included the murders of Deidre Moller, Antonia Maldonado, Theresa Taraldsen and Evelyn Summers. Although the cases were successfully closed, Donnelly and Phelps began to see similarities between the murders, and how all linking to each other and to the unresolved Black Dahlia murder, though Donnelly and Rusty dismissed the similarities as acts of copycats. Impressed with their strong convictions, Donnelly praised Phelps and Galloway as his "finest crusaders".

After receiving a series of anonymous letters and retrieving Deidre Moller's rings, Donnelly and Phelps realized that they were being mocked by the Black Dahlia killer, who was ultimately responsible for the other murders. This meant that the department had arrested five innocent men, with four impending execution sentences. Donnelly warned Phelps and Galloway that their careers would be over and would have to take the blame for their wrongful convictions unless they caught the real culprit - a hypocritical statement, given that Donnelly had once pressured them for quick convictions and dismissed the Black Dahlia killer as a suspect.

Using the letters as clues, Phelps and Galloway set out to find the real killer, during which they found substantial evidence from the previous murders. The trail ultimately led them to the Christ Crown of Thorns where they found and killed Garrett Mason, the Werewolf serial killer, in a shootout. Donnelly arrived and revealed that Mason was in fact the half brother of a very powerful and undisclosed politician, hence Mason's name and acts were to be kept out of public knowledge and out of official records. However, Donnelly promised that he and the District Attorney would ensure that the previous suspects would be quietly released. With the truth quietly buried, Phelps was promoted to Vice.

Later, as Phelps was trying to close the stolen morphine case, he questioned Courtney Sheldon and Dr. Harlan Fontaine. Donnelly and William Worrell appeared and interrupted Phelps' interview, summoning him to Worrell's office where they revealed the adultery charges against him for his affair with Elsa Lichtmann. Donnelly harshly chastised Phelps, expressing disgust and disappointment and even going so far to comment that Phelps broke his heart and questioning how he could do such a thing to his wife and children.

Captain Donnelly is the feared and respected Officer-in-Charge of the Homicide desk. The tough and no-nonsense Captain has been known to push a bareknuckle enforcer’s demand for confessions and convictions, and is less concerned with playing by the book if it means getting the results he demands. To this end, he often relies on interrogation to extract confessions rather than evidence. This proves to be his downfall, as he approves convictions for five innocent suspects, and sheepishly passes the blame to his Detectives.

Donnelly professes to be a deeply religious man, and speaks frequently in poetic biblical language. What is clear is that he uses his beliefs to cloak his strict and sadistic nature under a pretense of righteousness, and as a result, he demonizes and brutalizes suspects and convicted felons. Careers are made and broken on Captain Donnelly’s word. Cole Phelps, and before him Stefan Bekowsky, were promoted to Detective through the recommendation of Donnelly. 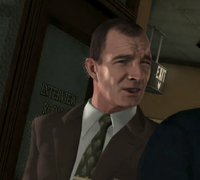 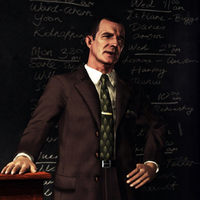 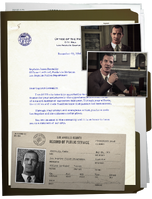 Add an image to this gallery
Retrieved from "https://lanoire.fandom.com/wiki/James_Donnelly?oldid=65369"
Community content is available under CC-BY-SA unless otherwise noted.