Landmarks are a type of locations in L.A. Noire. There are 30 landmarks to discover, and for seeing all 30, the player will earn the Star Map achievement/trophy. Discovering a landmark provides 5 experience points to the player, which will help towards increasing your rank and unlocking additional intuition points. Every landmark contributes about 0.3% to the game completion statistics.

Some missions, such as The Fallen Idol will credit landmark discoveries if they include any of these sites among their investigation locations and the Cole hasn't discovered them previously. With a few exceptions, players familiar with the layout of Los Angeles will find some of these sites, such as Grauman's Chinese Theatre, in the same locations as they can be found in real life.

Only a small percentage of recognizable locations in L.A. qualify as landmarks. See locations for a list of other points of interest that can be located while driving around. 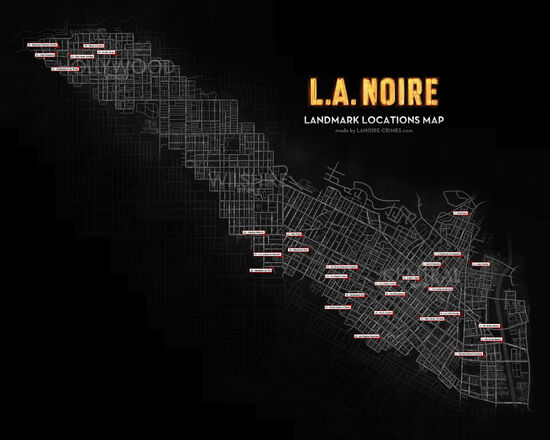 Retrieved from "https://lanoire.fandom.com/wiki/Landmarks?oldid=59751"
Community content is available under CC-BY-SA unless otherwise noted.