"I feel sorry for your wife and kids, Phelps, not for you. But you're a good case man, one of the best I ever met. I'll help in any way I can."
―Malcolm "Mal" Carruthers

In 1924, Carruthers joined the LAPD and started to work as a coroner.

Carruthers is first seen, alongside Floyd Rose and Rusty Galloway, bagging the body of Scooter Peyton to be taken to the morgue. Carruthers is later introduced to Detective Cole Phelps during his time in the Traffic department, appearing on the site of several traffic incidents.

As Phelps moved up to Homicide, Carruthers and Phelps worked more closely and frequently as they investigated a series of gruesome and brutal murders. They ulitmately deduced that all the murders were linked to one another, by one highly methodical and intelligent killer. Phelps later moved to the Vice squad and investigated several incidents involving the SS Coolridge's stolen army surplus morphine. Carruthers provided his knowledge on the effects of morphine.

Carruthers also appeared on the site of the Sawyer and Morelli house fires after Phelps' demotion to Arson. He showed disdain for Phelps after his extra-marital affair with Elsa Lichtmann, but decided to continue to maintain a working relationship with Phelps, in order to help him solve crimes. Carruthers inspected the bodies but deferred Albert Lynch, being the expert on fires. Carruthers is last seen at Cole's funeral, along with his other colleagues, to pay his respects.

Carruthers is an expert in science and forensics. He is very knowledgeable in a range of scientific fields and can analyze any situation or crime scene, making him a proficient, reliable and highly valued member of the force. Mal generally provides insight and points out details to Phelps in order to help with his investigation. He can provide the time of death, cause of, and tell Phelps other, smaller, details which may help him. Often during cases, he calls for Phelps to visit the morgue and gives detailed and comprehensive reports on autopsy results.

Mal and Phelps develop an ongoing working relationship, during which they both develop a strong mutual respect for each other. Despite his lack of sympathy for Cole because of his affair, (to which Cole comments "firm but fair") Mal still remains cooperative and respects Phelps as a good case man.

He is also something of humorless and no nonsense person, to quote Carruthers "I've doing this job for 23 years, son, and no one has laughed at one of my jokes". Ray Pinker also played a prank on Carruthers using the aluminum polishing patent experiment, a joke that was later repeated on Phelps. On both occasions Mal didn't seemed to be amused. Carruthers has a very strong professional and sharp demeanor as he's generally heavily focused on his work. As a result he's often distant and lacks any personal connection with other officers. Nonetheless, he is held in high regard by his peers, and nicknamed "Mal".

A sketch of Carruthers 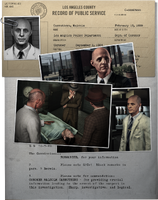 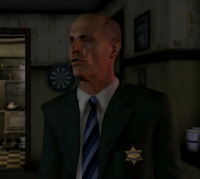 Carruthers at the Central Morgue with Phelps and Bekowsky

Carruthers with Phelps, at the scene of Adrian Black's apparent death

Carruthers with his Coroner's van

Carruthers with Phelps and Bekowsky

Add an image to this gallery
Retrieved from "https://lanoire.fandom.com/wiki/Malcolm_Carruthers?oldid=65410"
Community content is available under CC-BY-SA unless otherwise noted.