watch 01:04
What is Manifest Destiny?
Do you like this video?
Play Sound

Manifest Destiny is a Vice case in L.A. Noire. This is the last case Cole Phelps takes on the Vice Desk, before he is demoted to the Arson Desk.

After a shootout in a Hollywood club, Phelps must finish tracking down the remaining shipments of the Morphine.

The case starts out with a triple homicide at the 111 Club on Hollywood Blvd. Although the Homicide division is of course on the scene, Vice is called in due to the presence of yet more Army surplus morphine.

After finding all of the clues, interview the hostess.

Continue on to the Blue Room Club and you will be forced into a cutscene which leads to Elsa Lichtmann being questioned.

After this, you will tail Elsa back to her home by car. If you are not spotted you will unlock the Achievement/Trophy The Shadow. This is followed by cutscenes, leading up to you pulling up to a restaurant where you'll talk to Mickey Cohen.

Upon entry, Earle will inform the Maître D' that you are here to see Cohen. You will be shown to his table - it's number three.

"Mickey has been questioned a thousand times. See if you can do any better."
―Roy Earle

Now follow your partner to the Burglary department, sit down and take a look in the book Harold Caldwell gives you. There'll be four circles on the right hand page; tap all of them: M1928A1.45, M1918.30, Valor cigarette carton, Morphine Tartrate. Directly after, an officer will tell you that there is a sniper that needs to be taken out.

You are called to a bus shooting where you need to take out one of Cohen's henchmen. There is a ladder on the back of the building that he is atop. When the henchman is neutralized, search his body.

A cutscene will be activated and you'll be back on street level. You will start talking to another Marine from your old unit named Felix Alvarro, who happens to be the bus driver.

After answering the second question correctly you will earn an achievement/trophy, The Fighting Sixth.

Following this event, go to the gamewell on the street opposite the bus, next to the ambulance, to find out Jack Kelso's address. Once you get it, drive over there.

Drive to the apartment building and you'll find him walking up to his door. There'll be a short cutscene and you will be back at the Hollywood Police Station to interview him.

After the cutscene, you will interview Kelso.

Due to the number of questions, this interview is a good chance to get the Achievement/Trophy The Hunch.

Following on from this you will be forced to chase down and shoot multiple suspects at Robert's Diner.

You'll chase the goons in cars but eventually they will pull into a dead end and there will be a shootout. To easily win the gunfight, flank the storefront to the right, go towards the goons and kill them.

Examine the closest body to the thugs' car, before you leave.

Examine the newspaper located between the two dead bodies.  The second man cannot be examined.

Proceed to the Hollywood Post Office where you will take part in a shootout against 4 enemies.

Once you have defeated the shooters you will have to search the dead bodies.

Now head over to the Grauman's Chinese Theatre where a chase will await you.

Once you proceed to the theater you will have to chase down the new assailants and kill them. After the cutscene, go over to the meeting place.

Upon arrival, Cohen can be seen escaping in his car and a lengthy shootout ensues. The police station notifies Roy that Courtney Sheldon, who is accompanied by Dr. Harlan Fontaine, is requesting to be interviewed by Cole.

Once you reach the Hollywood Police Station you will need to enter Interview Room 2 to begin the cutscene which leads to the interrogation.

After the interview, Sheldon is prepared to make a deal. However, before Phelps is able to begin negotiating, the Chief and Captain interrupt and inform Phelps that he is suspended pending a fitness review. It is revealed that Cole's affair has been exposed and his wife, Marie Phelps, is kicking him out.

In the final cutscene Phelps is seen entering Elsa's apartment.

"Multiple homicide at the 111 Club. Sounds like they shot the place up without much concern for who got in the way. The shooters' motives are unclear, all we know is that two victims turned up carrying Army surplus morphine and now Ad Vice needs to make an appearance. We took a hundred grand's worth of this dope from Lenny the Fink, and somehow it's still reaching the streets." 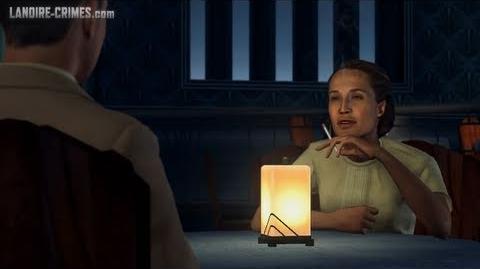 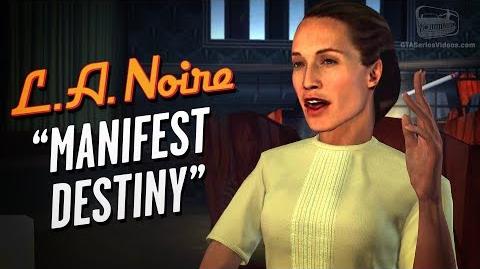 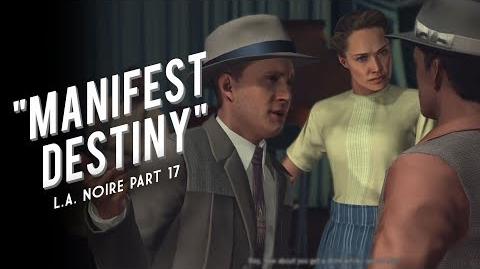 Retrieved from "https://lanoire.fandom.com/wiki/Manifest_Destiny?oldid=66387"
Community content is available under CC-BY-SA unless otherwise noted.