"The street life have no idea how dangerous this stuff is."
―Cole Phelps, upon examining a syrette.

Morphine is a recurring piece of evidence featured in L.A. Noire. Morphine is a drug that serves as the the driving force in the game's later events.

Morphine is based on an opioid chemical and is commonly used as an sedative and painkiller. Although clinical medicine, it is heavily controlled by the government to prevent abuse, addiction, illegal trafficking and in worse cases even death.

Due to extreme conditions during war time, the U.S. Government issued morphine to help soldiers during World War II. Morphine would help relieve physical pain from wounds as well as psychological stress from battle fatigue. Morphine was stored and administered using a device known as a "syrette" which consisted of a hypodermic needle and a flexible tube, which would be squeezed to move the fluid through the needle for injection. Syrettes were packaged in small cardboard boxes which could be carried in the kits of medical personnel.

However, a downside to morphine is it's extreme potency. Exceeding the normal dose even by a small amount can be fatal. Since morphine is a central nervous system depressant, overdoses can cause respiratory and heart failure by suppressing respiration and blood circulation. Another set back of morphine is addiction, since it may be taken for the feelings of euphoria and relaxation it induces, thus creating psychological and physical dependency.

As World War II came to an end, the Government and the Military had a surplus of morphine. In early 1947, a group of the Sixth Marines were shipped back home to Los Angeles on board the SS Coolridge, along with a cargo of army supplies including half a million morphine syrettes. Realizing the street value of morphine, Marine Medic Courtney Sheldon convinced his fellow Marines to band together to steal the morphine, ultimately to sell on the streets. Despite objections from Jack Kelso, the heist proceeded as planned. Interestingly enough, Cole Phelps was a former member, but he already joined the LAPD at the time.

After committing the theft, the distribution was headed by Sheldon, who got into contact with the Cohen Crime Syndicate through Lenny Finkelstein, giving him one-third of the shipment. Sheldon intended to distribute the morphine legitimately to hospitals and abortion clinics. However, Mickey Cohen peddled the morphine onto addicts, exploiting and preying on the desperate and addicted. The morphine syrettes gave Mickey a considerable competitive edge in the city's drug narcotics rackets, due to the fact that the morphine was easy to administer and did not require cooking, growing or preparation in contrast to cocaine, marijuana or heroin. However, addicts began to die from overdoses.

Sheldon met with Mickey to change this arrangement. Mickey decided to remove the packaging and water down the morphine in a large vat to make it less potent, to ensure returning customers. In addition, he wanted to offer Courtney $50,000 as compensation. However, Sheldon disagreed with Mickey's business agenda plans, informing him that it would be more dangerous to water it down. Sheldon subsequently rejected his buy-out offer, and withheld the rest of the supplies from Mickey.

With the remaining two-thirds of the surplus shipment left, Sheldon panicked over how to dispose of the morphine before Mickey could steal it from him. Sheldon confided in his mentor and friend, Dr. Harlan Fontaine, revealing his involvement in the Coolridge robbery and distribution of the morphine with Mickey Cohen. Fontaine provided a solution for both their benefits. Fontaine promised to take the remaining morphine from Sheldon and promised to distribute it legally to clinics, in exchange he would be able to reinvest the money that he would usually spend on morphine into a housing development plan for returning GI's. Sheldon, realizing that he could solve his problems, and help out returning GI's, confidently accepted Dr. Fontaine's offer.

In actuality however, Fontaine took the opportunity to become a drug dealer himself, selling the morphine to students and addicts under the pretense of administrating them as "prescription". With the proceeds, Fontaine was able to invest and become part of the Suburban Redevelopment Fund.

Meanwhile, Mickey entrusted his stash of the morphine to Lenny, leaving him in charge of the drug operation and distribution, though he was also primarily a patsy. Using his shut-down ice company as a front, Lenny kept the morphine in cold storage and would later use Jose Ramez's furniture and delivery store to covertly transport the morphine to suppliers and distributors. Suppliers included Merlon Ottie and Jermaine Jones. Ottie ran a gambling den, and Jones managed his own musical booking agency, respectively. Jones would send the morphine syrettes to distributors such as Fleetwood Morgan, who used the Black Caesar Food Hut to discreetly sell the morphine along with servings of popcorn, taping the syrettes underneath cups, even in broad daylight.

Approximately six months after the Coolridge Heist, the LAPD finally found leads to the morphine, around the same time as Cole Phelps' promotion to the Vice Squad. Investigating the deaths of Cornell Tyree and Tyrone Lamont, from overdoses of morphine, with help from Coroner Malcolm Carruthers, Phelps and Roy Earle discovered the distribution chain leading all the way back to Lenny and Mickey. Phelps and Earle arrested several dealers, killed Lenny, while discrediting Mickey and procured the morphine from the Polar Bear Ice Company, presumably returning it to the government. However, much of the morphine unaccounted for was still being dealt throughout the city.

After losing his stash of morphine to the LAPD, an enraged Mickey Cohen attempted to pressure Sheldon once again into giving up the remaining cargo. To that effect, he sent assassins to track down and kill the other marines who'd participated in the Coolridge heist. Cohen had his men murder Eddie McGoldrick at his jazz club, Chris Majewski in Robert's Diner, and Walter Beckett and Michael Driscoll at the Hollywood Post Office. He also tried to kill Felix Alvarro while he was on his bus route and Patrick Connolly and John Higgins while they were leaving Grauman's Chinese Theatre, but failed due to the intervention of Phelps and Earle. Ultimately, the scheme was unsuccesful, as Sheldon refused to give up the morphine even after his friends were killed, since he knew that surrendering the drugs to Cohen would only end in more deaths.

Fontaine would later murder Sheldon with a morphine overdose in an attempt to cover his tracks. After Fontaine's death at the hands of Ira Hogeboom, which was investigated by the LAPD, Phelps and Herschel Biggs discovered Fontaine's remaining cache of the morphine in his office. It is unknown how much Fontaine still had and how much he sold, as well as how much investment money he made, however presumably the amount that was left in his office was returned to the government. 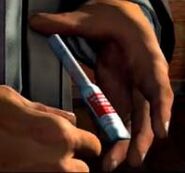 Phelps examines a syrette of the army surplus morphine. 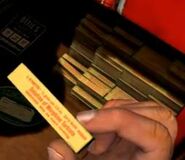 A sketch of the army surplus morphine.
Add an image to this gallery

Retrieved from "https://lanoire.fandom.com/wiki/Morphine?oldid=65523"
Community content is available under CC-BY-SA unless otherwise noted.