"I've heard all about you, Phelps. You go easy on me and let me earn the odd citation, then maybe we'll get along."
―Stefan Bekowsky

Detective Stefan Bekowsky is a central character in L.A. Noire. Bekowsky is Cole Phelps' partner while he is assigned to the Traffic desk, becomes Harold Caldwell’s partner in Burglary some time during Phelps’s time during Homicide and the first 3 cases of Vice, and later becomes Rusty Galloway's partner in Homicide 3 cases after the time after Phelps was promoted to Vice.

Stefan Bekowsky was born in 1921 in California. He is from a Polish American family and is often referred to as "Polack" or "everyone's favorite Pole". In 1939, when he was 18, he joined the Los Angeles Police Department as a police officer. When World War II broke out Bekowsky was declared unfit for military service for reasons unknown. He worked as a Patrol Officer for a period of six years and was involved in the Zoot Suit Riots, where he (at least claimed to have) earned the LAPD Police Medal for Heroism.

In 1944, he was recognized by his superiors as a good investigator, being recommended by Captain James Donnelly for a promotion to the rank of Detective and immediate transfer to the Traffic department. His time in Traffic gave him little opportunity for recognition or a promotion, though he worked to be a proficient and experienced detective.

"I've partnered Phelps with everybody's favorite Pole, Stefan Bekowsky. (Joseph Hobbs: Hope you like work, kid. Bekowsky sure as hell doesn't.) (Bekowsky: That's why we have partners, right?) OK, OK. Can it, guys. Stick with Bekowsky. He's a good cop, and he knows Traffic inside and out. I'm gonna start you out with one case. You do OK, I'll give you a couple more. You screw up, you'll be rousting vagrants and running license plates."
―Gordon Leary, upon Phelps's and Bekowsky's partnership

"They really pushed you through quick, didn't they? Six years on Patrol before I got this desk, you were here in five minutes. (Phelps: What do you want me to say? I didn't ask for any favors.)"
―Bekowsky on Phelps' swift promotion to Detective

Three years later, Stefan met his new partner, Cole Phelps, who later became a good friend, and helped him to investigate many crimes. They pursued a string of intriguing cases on the Traffic Desk, such as uncovering acts of fraud, conspiracies, and even first-degree murder, while generating good press for the Police Department.

While investigating a Chevy Skyline crash off a cliff, Bekowsky got the chance to meet his favorite B-movie star, June Ballard, though she rudely dismissed him. His admiration soon turned to disgust during the investigation, as Bekowsky discovered that June had set up her own niece to be drugged and raped by Mark Bishop.

Bekowsky and Phelps later went to arrest Marlon Hopgood for his part in Jessica's rape and for child pornography, but their arrest attempt was blocked by Roy Earle due to Hopgood's work as a Vice informant. When confronted by Johnny Goldberg and Frank Steiner, Bekowsky pushed stern warnings against them before having to fight them off in a drive-by shootout.

Bekowsky radioed for backup as Phelps went ahead into the Intolerance Set to apprehend Bishop, as well as providing Phelps with support and were able to defeat a small army of Guy McAfee's goons. Having upstaged the Vice Department by bringing down Bishop while thwarting McAfee's efforts, Phelps was later promoted to Burglary, then Homicide, and eventually moved up to Vice. Some time during Phelps’ time in Homicide, Bekowsky was promoted to Burglary. After Phelps went up from Homicide to Vice, Bekowsky was promoted to Homicide and partnered with Rusty Galloway.

"I haven't got time to jaw, Cole. The Captain wants me to make this case."
―Stefan Bekowsky

Bekowsky, Phelps, Galloway and Earle all had a brief reunion while investigating the Julia Randall case. Bekowsky's assistance helped take down Henry Arnett and Willy Reade. Bekowsky also initially investigated the 111 Club shooting, until Phelps and Earle took over for leads on the stolen morphine distribution.

After Phelps' death, Bekowsky, along with Phelps' other former partners, attended his funeral to pay their respects. Some time between Phelps’ death and Earle’s termination, it is unknown if Bekowsky was promoted to Ad Vice.

"I've heard all about you, Phelps. You go easy on me and let me earn the odd citation and maybe we will get along fine."
―Bekowsky, greeting Phelps.

At first, Bekowsky found it irritating that Phelps was promoted from patrol officer to detective after serving the force for less than a year, as Bekowsky worked as a patrol officer for six years. However, he ultimately got along well with Phelps, offering his knowledge and experience to aide their investigations.

"Hope you like work, kid. Bekowsky sure as hell doesn't."
―Joseph Hobbes on Bekowsky's work ethic.

Bekowsky was regarded as a slacker within the department, and Earle describes him as a "pushover". However, if either of these statements were justified, there was little indication of it during his partnership with Phelps. Once Phelps was promoted to Vice, Bekowsky was quickly promoted to the post in Homicide that Cole had vacated.

Bekowsky had a reputation of being a bit of a joker, though ironically, he had a strong distaste for car salesmen as he found them irritating and unbearably comedic.

Full view of the Artwork 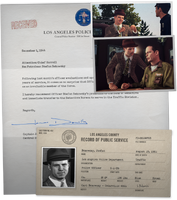 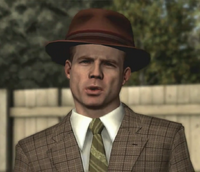 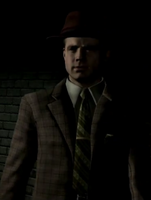 Phelps and Bekowsky ready for battle, seen in case "A Slip of Tongue". 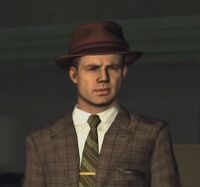 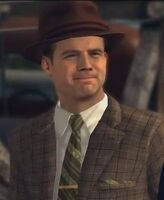 Phelps was introduced to Bekowsky by his watch commander.