watch 03:10
'L.A. Noire' Walkthrough: The Black Caesar
Do you like this video?
Play Sound

"Two men dead on US Army issue morphine. That makes it an Ad Vice case. Beat it!"
―Archie Colmyer

The Black Caesar is a Vice case in L.A. Noire. This is the first case Cole Phelps takes on the Vice Desk after being promoted from the Homicide Desk.

Phelps and Earle report to the scene of two dead junkies, Cornell Eustace Tyree and Tyrone Anthony Lamont, found in a squalid apartment at 6358 Yucca St., Apt. 5, in Hollywood. Surgical tubing found still wrapped around their limp, track-pocked arms. Their drug of choice: government issue morphine. Your job is to track the morphine back to the supplier and bring them down.

"They really picked a prize shithole for our first date."
―Roy Earle

Investigate the crime scene over at the junkies' apartment. It will be on the second floor, all the way at the end of the porch. When you walk through the front door there will be a Black Caesar cup. Further investigate it to discover tape on the bottom. Continue searching the apartment to discover a number of clues.

Note: In some cases, you may need to investigate the dead man on the chair in order for the investigation music to stop.

When you arrive at the food hut, a short cutscene will ensue after which you'll have to chase the vendor, Fleetwood Morgan, down on foot, and engage in a fist-fight. Once you have him, search the hut for clues.

Now go over to Morgan and talk to him.

After talking, use the phone next to the food hut to trace Jermaine Jones' address, then head there. Don't go to Merlon Ottie's office yet, you don't have the evidence you'll need to catch him in a lie.

Climb the stairs and look at the building directory nearby to see that Jones' office is #238. Go inside and talk to Jones. He will begrudgingly let the detectives look around.

Go to the big radio and turn on the volume, choose FM band and tune the frequency to 275. The top of the machine will open and you will be forced into a brawl with Jones' goons. The radio includes $5000, morphine, Ottie's number card, 4 ounces of marijuana and a Ramez Removals sticker.†

Although it will not give Phelps another clue in his notebook, after inspecting the items in the radio's compartment, you can walk behind Jones' desk and inspect a smaller radio, also with a Ramez Removals sticker on it. Cole tells Jones he hopes none of his property is purloined, to which Jones replies (rather unconvincingly) that he has a receipt for it... somewhere.

Now go over and talk to Jones.

† The "Link to Ramez Removals" option will not appear if you don't select the sticker in the larger radio. It's easy to miss due to its location; it's above the other items when you search the radio.

Use the gamewell next to your parked car to get the address of Ramez Removals, then head over to the Numbers Operation.

Merlon Ottie's office is up the stairs. Go to the slot machine and use it; if you see a symbol in its respective position, press "hold" on that slot. The correct symbol order is gathered from the "Strange doodle" clue discovered at the crime scene (Cherry, Bell, WIN). Once they are in their positions the lid will open and reveal Ottie's secret stash.

Now you'll have to chase after Ottie. He is fairly easy to catch, just stay on him until he runs into a bar then run around the building and locate the other exit. You can either wait for him to come out or just step inside and catch him. If you fail to do that, he will eventually run into some pedestrians and you should have enough time to reach him. If you don't catch him on the streets, he hits a dead end going down an alleyway.

After he's been caught you will go back to his office and interview him. Earle will hand you Ottie's cane. Further investigate it by opening the handle and you will find a new clue.

Then Phelps will have the opportunity to question Ottie.

In the Switch remastered version of the game, the "Link to Lenny Finklestein" question will not appear.

If you have found all the evidence up to this point, you will only ask the first two questions here.

Now it's time to go to Ramez Removals.

Corner of Sunset Boulevard and Wilson

Upon arrival, there is another chase scene. Other LAPD units will assist in the chase. After pursuing the truck, you'll be back at Ramez Removals. Go inside to look for clues. To the left will be a desk area; look in the records book and tap on "Polar Bear" and "Merlon." There is a also a newspaper to collect here..

Follow the water to the back of the warehouse and climb the ladder up to the crane. Use the crane to pick up a box to clear the entrance to the room, which looks like a white square structure with refrigeration units on top. Go inside and check the block of ice; after this, you are able to shoot it. After that, you have to look through a delivery book at the front desk and select any order from Polar Bear Ice Company.

After that, a cutscene will ensue wherein the Polar Bear Ice Company delivery truck pulls up and Ramez runs inside the building. Phelps and Earle will then need to chase and subdue Ramez in a shootout.

You get in a chase/shootout with Lenny Finkelstein and his gang. Chase them through the factory and kill his men. At the same time, halfway into the chase, you end up in a giant freezer. In the back is a set of stairs up to a landing where Lenny is. Climb the stairs; a cutscene occurs where afterwards you have to shoot Lenny the Fink. Now look through the crate at the back of the office and find the morphine. Case closed.

"Reassignment by special request. This time it's the Administrative Vice squad, Hollywood Division, and the LAPD's own movie star cop. Myself and Detective Earle have been detailed to investigate the overdose of two male Negroes in an apartment on Yucca Street. We're most interested in the source of their supply - dangerous pure morphine, US Army surplus." 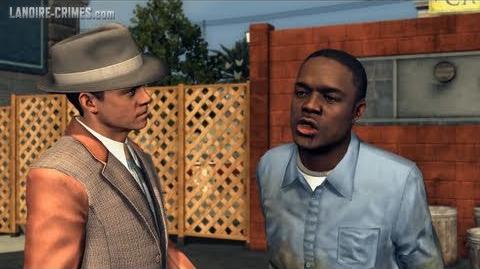 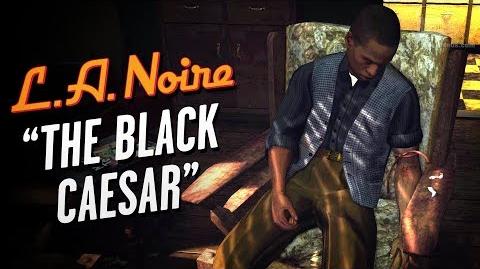 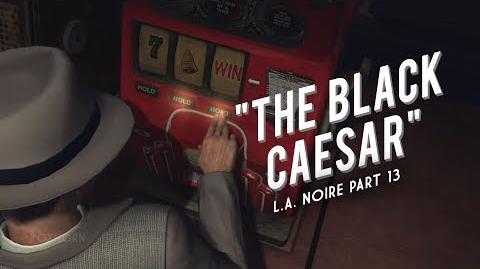 Retrieved from "https://lanoire.fandom.com/wiki/The_Black_Caesar?oldid=66485"
Community content is available under CC-BY-SA unless otherwise noted.