Start a Wiki
watch 01:55
What is The Fallen Idol?
Do you like this video?

Cliff across the street from Central Police Station

"This is a sick town, Detective. The truth is my husband likes them young."
― Gloria Bishop

The Fallen Idol is a Traffic case in L.A. Noire. This is the last case Cole Phelps takes on the Traffic Desk, before he is promoted to the Homicide Desk.

Due to its close proximity, you can walk there from the station, but you'll probably be needing the car later anyway. When you get there, you'll be briefed by police officer Enrique Gonzales during a cutscene. Use the side embankment pathway to the left to get to the actual crash site, where you'll find the coroner. Examine the following clues.

Talk to the coroner and he'll give you another clue.

Go up the same pathway you came from and go towards the ambulance to trigger the interview.

When you arrive, speak with the receptionist to locate Jessica's room. Before entering, speak with the doctor standing outside the room. Inside her room, examine the following clue before the interview.

As you leave yourself, you'll see June leave with her lawyer and decide to follow her. This part is similar to certain missions in the GTA-series, where you have to follow the target from a distance. Be careful not to get too close, too far away, or draw attention to yourself by driving recklessly. Remember, crashing and turning on the siren can also cause failure.

You tail her to a cafe, where you'll be able to eavesdrop in on her conversation presumably with Guy McAfee. Take cover by the door until she gets on the phone and then quickly get to the booth with the newspaper on your left as you walk in to go incognito. If you haven't already achieved it, you will earn the achievement/trophy The Shadow if you successfully tail June Ballard without being spotted.

If you get here fast enough you'll get to beat up McAfee's guys, but it won't have any impact on your case rating. Find the following clues before you interview Gloria.

Before leaving, use the phone inside Bishop's apartment or outside on the street to get the address for the Silver Screen Props location.

When you arrive follow Marlon to the sound stage and find the following clues.

Go back inside and interview Marlon.

During the cutscene, you should decide whether you're up for a shootout or a car chase, as some of Mickey Cohen's guys are waiting for you outside. Either way, your main focus should be to get out of there quickly.

When you arrive you immediately spot Mark. Prepare yourself for a little chase that will take you around most of the set. As you finally catch up with him, Guy McAfee's guys arrive and you will have to defend Mark as well as yourself.

"Assigned to an auto accident. A Chevy Styleline, wrecked after driving at high speed over the escarpment opposite Central. Remarkably, no fatalities. Female driver and passenger escaped with minor injuries. The driver is even lucid enough to be making allegations of attempted murder. I get the impression the Captain isn't wild about her story, but he still wants the crash site worked."

"Shit, get us out of here!"
― Stefan Bekowsky

Phelps looks down at the scene of the crash

Inside the wrecked car 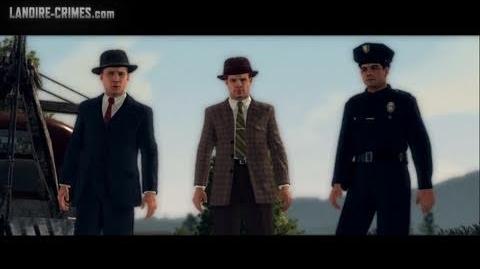 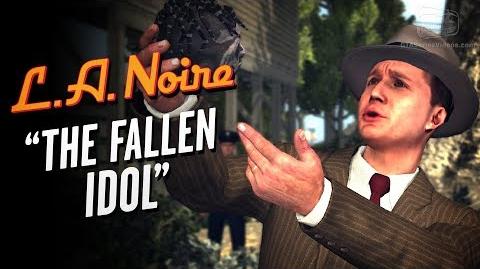 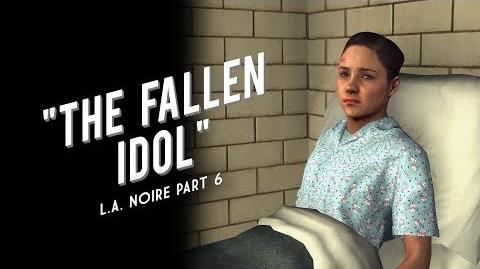 Retrieved from "https://lanoire.fandom.com/wiki/The_Fallen_Idol?oldid=65663"
Community content is available under CC-BY-SA unless otherwise noted.