"I hear you're a good case man, but if you fuck up on my detail, I'll have you out of here before your feet touch the ground."
―Lachlan McKelty

The Gas Man is an Arson case in L.A. Noire. This is the first case Cole Phelps takes on the Arson desk after being demoted from the Vice desk due to the scandal he caused.

The opening cutscene shows Cole Phelps at the Wilshire Police Station, sitting down at his table while the following conversation takes place:

Lachlan McKelty: "Okay everyone, keep it down. Cole Phelps joins the Arson squad today."
William Tilden: "(chuckles) How'd you like porking that German whore, Phelps?"
Lachlan McKelty: "Phelps is up before a review board in December. Until then he works the Arson desk. End of story. Phelps."
Cole Phelps: "Yes, sir."
Lachlan McKelty: "I don't care what you did or didn't do, Phelps. I hear you're a good case man, but if you fuck up on my detail, I'll have you out of here before your feet touch the ground. Do we have an understanding?"
Cole Phelps: "Yes, sir."

Steffens will give you the Competition Ticket clue and the location of Gulliver's Travel Agency. After speaking with Steffens, you need to search for one clue. Go to the left side of the house, near the chimney. If you look at the fence you should see an InstaHeat heater box. Check it for the clue.

Now use the gamewell down the street to get the address for the Suburban Redevelopment Fund.

Upon arriving, you'll meet Albert Lynch and Jake Rampley. After the cutscene, talk to the coroner and then examine the bodies of the deceased family.

"Phelps - the guy across the street... I've seen him before. He likes fires."
―Albert Lynch

After discovering the valve you will need to chase down Herbert Chapman, a known pyromaniac who is identified by Albert Lynch. You will have to chase down and tackle him, or wait until he has run out of stamina and fight him hand to hand. He is the first suspect in this case.

Upon arriving at the agency, you will talk to John Cunningham. He will provide a ledger and you will need to tap your finger on the Steffens family and the Sawyer family on the left-hand page. After selecting the families' names you will interview him.

As an alternative, you can visit the travel agency before investigating the Sawyer house, as a glitch can occur where Cunningham will not be present. The door will be inactive and the player will be forced to restart the case.

The site turns out to be an Elysian housing development work site. If you want, you can enter the small building to your left to discover a note from Leland Monroe; however, this does not count towards the case.

The location of Fire Station No. 32 will now become available.

When you arrive, Albert Lynch will show you the heater panel from the Sawyer house. He will then explain how the explosion happened and set up a demonstration for you to complete. Put the balloon on the right, the regulator valve in the middle, and the Bunsen burner on the left.

Phelps will then ask for a list of installers.

Use the phone to your left to check all of the names on the list for criminal records. The names of Walter Clemens, Matthew Ryan, and Reginald Varley will appear in your notebook, as well as their criminal record clues. Talk to Rasic again for the addresses of all three suspects.

If you haven't driven one yet, drive an InstaHeat van in the parking lot for progress on the Auto Fanatic Achievement/Trophy.

By firing a warning shot, you can earn the Not So Hasty Achievement/Trophy, if you've not already done so.

Matthew Ryan will try to escape in his car. Do not be afraid to use your brakes; he takes tight corners and getting hung on even one of them means restarting the chase over again. Biggs will try to shoot out his tires. If you fail to stop Ryan, he will eventually be hit by a tram, causing his vehicle to roll, ending the chase. At times, the tram will not stop Ryan: If it doesn't then continue chasing him until he hits a pole.

"The Arson desk took reports overnight of fires at 326 South Kenmore and 4414 Rosewood. Residential, no background, no mention of suspicious circumstances or insurance. All we know is that they used to be houses and now they're piles of ash. Biggs and I have been assigned to investigate, though I hardly even know what that means. My new partner doesn't seem very forthcoming on the subject." 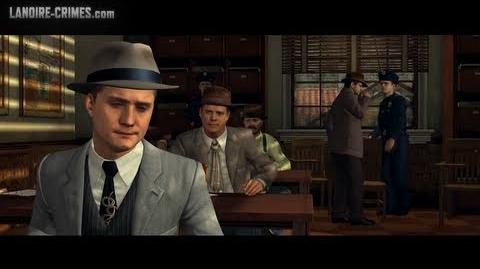 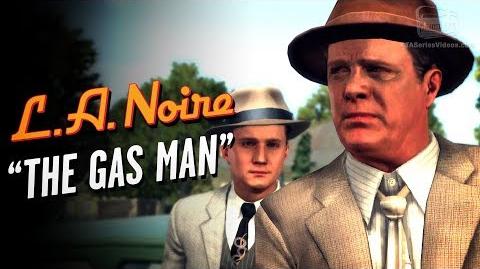 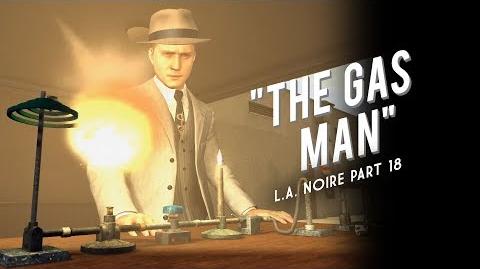 Retrieved from "https://lanoire.fandom.com/wiki/The_Gas_Man?oldid=65237"
Community content is available under CC-BY-SA unless otherwise noted.