"I saw her on the slab. So perfect. Looked like she was made of porcelain. She really made an impression on me."
―Lieutenant Archie Colmyer

The Naked City is a Vice case in L.A. Noire. It is a pre-order bonus courtesy of EB Games/GameStop. Also available without pre-order from GAME UK and the Complete and Remastered Editions.

Julia Randall, a stunning fashion model with the world at her feet, is found dead in her own bathtub. To the Homicide squad it looks like a textbook society-type's suicide - just another glamorous life ended early by the victim's own hand - but coroner Malcolm "Mal" Carruthers remains unconvinced. It falls to detectives Cole Phelps and Roy Earle to investigate the scene and determine which of Miss Randall's vices really killed her.

When you start, you're presented with a cutscene which shows Lt. Colmyer ordering Cole Phelps and Roy Earle to go to 5810 Mirada Avenue at Homicide's request. Lt. Colmyer says Dr. Carruthers believes the victim was killed by the army morphine and then cuts off Detective Earle from saying anything about it, telling the two detectives to just get over there. During the drive to the crime scene, Roy will say that they collected all the morphine and if some is missing it's not a big deal.

Head upstairs and towards the open door at the end of the second floor hallway. When you get near the door a cutscene will be triggered in which you will meet up with your ex-partners, detectives Rusty Galloway and Stefan Bekowsky (who has been promoted to Homicide).

Go into the bathroom to trigger an exchange with Carruthers in which he will present his thoughts, including an explanation of the effects of drowning in the bath tub and why this isn't what happened, despite an attempt to make it seem so.

Go into the living room and question Virginia Reynoldson, the victim's housekeeper.

When you're done in the apartment, descend the stairs to the main floor, where you will want to inspect the garbage can to your right near the plant, if you haven't done so on your way in. You will the find the syrette of morphine the coroner was looking for, as mentioned earlier, as well as earn the A Good-Looking Corpse Achievement/Trophy.

Drive to D'Assine Dress Store. When you arrive, enter the shop and turn left - you will see a woman sitting at a desk. Talk to her.

Once you're done talking with her, she will offer to fetch her current employee and Julia's friend, Heather Swanson, but not before Cole asks her to withhold from Heather the information about Julia's death. She accepts, and when she returns with Heather, you proceed to have a chat with her. She informs Cole that she got the job at D'Assine thanks to Julia. Phelps notices Heather's engagement ring and asks to examine it. While examining, Phelps states that it must have been very expensive. When you're done, return the ring and interview her.

Once the interview is over, Cole asks Heather to have her fiancé stop by the station, which she firmly refuses to do until she is given more information. Cole finally tells her that her friend Julia was found dead that morning, resulting in Heather breaking down. Roy later comments on Cole not informing Heather, calling it slick. Cole defends his reasoning by saying that they would receive more useful information from her that way. Roy then replies with "You're learning Phelps, we'll make a Vice cop out of you yet."

Once this is over, head over to the car and drive (or have your partner drive) to Dr. Stoneman's Practice. When you arrive, use the sign to your right, showing that Dr. Stoneman's office is located on the fifth floor. Use the elevator at the end of the hall to access the fifth floor. Enter office #505 and talk to the doctor's receptionist.

Inside the office, proceed to interview Dr. Stoneman.

After the interview is over, use the phone in the office or at the receptionist's desk. Dispatch will inform you that you should head straight to Hollywood Receiving Hospital.

When you arrive, Carruthers will show you another body, Jimmy LeBlanc. You will be asked to look at an item that was found in one of the pockets of the victim's clothing. After you have examined the item, Carruthers will receive a call for you to proceed to Interview Room 2 in order to question Henry Arnett.

After the interview, leave the station and tail Arnett. He leads you around for a while before stopping at a pawn shop to get some money. After he comes out, Earle goes into the shop while you tail Arnett on foot. Keep your distance and he will lead you to a travel shop called Ao-Kuewa Travel Co. There's a brief cutscene before you meet up with Earle again. If you are not spotted, then you get the Fakeloo Achievement/Trophy. Be very careful here, if you are spotted either in your car or on foot you will have to quit out of the game and then reload the case in order to attempt the achievement/trophy again. Simply restarting the tailing scenes from the police station, where the game resets you after failing, will not award you the achievement/trophy, even if you aren't spotted the second time. If you do have to back out and reload, you will have to go through the interview with Arnett again.

Use a gamewell or get back in the car and you will get two messages. The first message informs you that the Homicide detectives have information relating to the case, telling you to return to the station. The second message states that the last arresting officer for Leblanc was Patrolman Fred Wallis who is currently working his beat on Sunset Boulevard between Gordon and Wilcox.

When you arrive at the beat you will need to chase down two criminals, which will lead to a shootout. After the criminals are dead, Wallis tells you that LeBlanc previously had a partner called Willy who is possibly a strongman.

Head back to the police station to find out what Bekowsky and Galloway have for you, resulting in a cutscene that shows Galloway getting riled up with Phelps attempting to give orders. Phelps then asks to see the contraband list, and Earle asks if the cigarette case is on it. Tap the Cigarette Case, Black Sapphire Ring, Pearl Ring and Pill Box. Tapping on all four will give you the clue Contraband List which you will need later for an interview.

If you go to the Police Station before talking to Patrolman Wallis it will not affect your case rating.

Head to the Evestrom Residence to see Mrs. Evestrom about her burglary. Her maid, Maria Latorella, lets the detectives in and Mrs. Evestrom offers drinks before you sit down to ask her some questions.

After the questioning, a surprise visitor turns up. As a result, Phelps and Earle, along with Heather Swanson, head over to Arnett's apartment. If you get there without damaging the vehicle you will get the Chauffeur Service Achievement/Trophy.

When you arrive, speak to the guy at the desk and he will tell you to take the elevator. When you get to the apartment there is a crash, leading to a chase across the roof before Phelps is knocked out. After the cutscene, search the apartment.

The next stop is where 'Mr. Henderson' (Harold Stoneman) works. He admits his guilt in a cutscene where he escapes from his insanity and throws himself out of an open window, prompting Roy to say that he "Didn't see that coming" and "That old boy really fell for that broad". Use the phone on the desk to receive a message that Bekowsky has the address of Willy and he will meet you there.

When you arrive, Bekowsky and Galloway go left around the block while Phelps and Earle go right. Follow the sound of the harmonica until you find Willy and he does a runner. Quickly climb up the drainpipe behind him. When you get to the roof, vault the wall then climb the ladder. Run along the gantry in front of the billboard and go through the window. Go up the stairs and onto the roof. Climb another drainpipe and Earle will join you in a cutscene. Willy is climbing the BROADWAY sign. Before you shoot at him, shoot all of the letters off of the frame to get the Give My Regards Achievement/Trophy. Shoot Willy and trigger the closing cutscene and the Eight Million Stories Achievement/Trophy.

"Headed out to an apartment at 5810 Miranda Avenue. Sounds like there's a shadow of Army surplus morphine hanging over the place and this deceased female is getting a visit from Ad Vice, whether she likes it or not. Carruthers must think the crime scene evidence suspicious enough that he won't sign off on an overdose or a suicide. We'll trust his judgment, as always, and hope he can stall Homicide until we arrive."

Guess he really fell for that Broad!
Add an image to this gallery 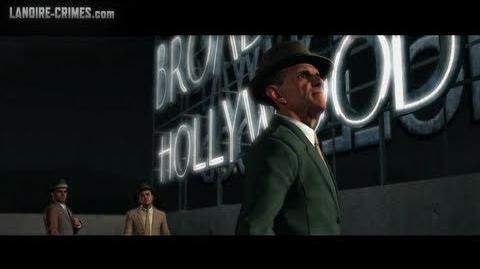 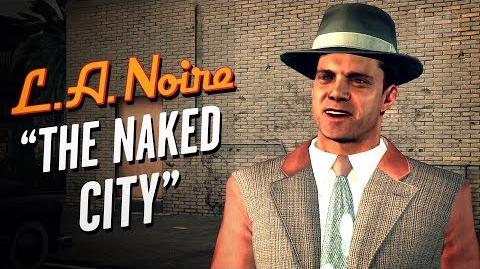 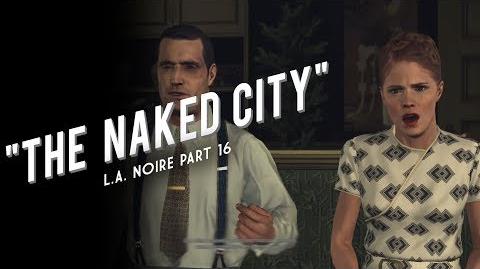