View source
watch 01:39
What is The Red Lipstick Murder?
Do you like this video?
Play Sound

"You're in the major leagues now, sonny."
―James Donnelly

The Red Lipstick Murder (aka: The Mendez Case or The Henry Case) is a Homicide case in L.A. Noire. This is the first case Cole Phelps takes on the Homicide Desk, after being promoted from the Traffic Desk.

The mission takes place six months after Cole's promotion. He and his new Homicide partner, Galloway, get a briefing from Capt. James Donnelly and drive to the crime scene. At the crime scene, on a hill called The Moors, they find the body, marked off by police tape. The victim found at the scene is naked, mutilated, and badly beaten. You see the footprint on the woman's chest, a message written in lipstick, and a piece of jewelry torn from her finger. One of the officers present then comes and brings some relevant information about the case, such as the fact that the characteristics of the injuries indicates that it is the action of the serial killer "The Werewolf."

Phelps is told in briefing that he and his new partner Rusty Galloway are to investigate 'The Moors' crime scene.

Once on the scene, you’ll talk to Officer Houlihan. Talk to the coroner, Malcolm Carruthers, and then you'll be able to find the following evidence:

Drive to the Bamba Club. After talking to the temp barman, Garrett Mason, head to the back of the club and speak to Mr. McColl.

Answering "Suspect seen with victim" correctly will unlock the Round Heels secret achievement/trophy.

Before you leave, use the payphone at the front of the Bamba Club to start the trace on the license plate.

Drive to the Henry Residence. Once inside, pick up the newspaper on the floor directly inside the house, then the following clues.

Canvass the neighbors southward, at the blue house. In the backyard is Jennifer Horgan; talk to her.

Drive to Jacob Henry's apartment. Before talking to Jacob, search the apartment for clues.

The fourth question will only appear if you failed the first one.

Then Rusty will enrage Jacob, who instigates a fistfight. Defend yourself against Jacob, then use the telephone in the kitchen to call for transport, to pick up a message from the coroner about the cause of death, and to learn that the license plate was traced to Alonzo Mendez.

This is entirely optional as it is possible to obtain a 5 star rating without interviewing Jacob.

Drive to Alonzo Mendez's apartment. Look at the mailboxes and go inside. Enter Alonzo’s apartment on the fourth floor.

Be sure to look at the shoe first. If you do not look at the shoe before you look at the items in the bloody box, you will be forced into a cutscene and you will miss a clue at the end of the case, although it is possible to obtain a five star rating if all questions are answered correctly and damage is kept to a minimum.

As Phelps and Rusty leave the bedroom, Alonzo arrives home. Pursue Alonzo across the rooftops toward the gas station, where Rusty pulls up with the car. Chase and arrest Alonzo.

"New day, new assignment. Dispatched to a fresh Homicide, one female victim, Caucasian, middle-aged, stripped naked and brutalized in a parkland off Court Street, between Belmont and Glendale. Shades of the Dahlia killing need to be treated with caution. The hysteria won't help the hunt for this woman's killer, and between that and my new partner I have enough to worry about."

"Do you have a mother, asshole? A sister? How about showing some respect for this poor woman? Let us do our job and Detective Galloway will give you a statement later."
― Cole Phelps 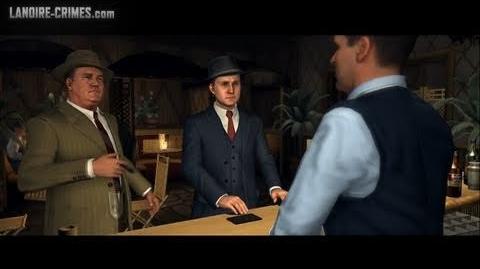 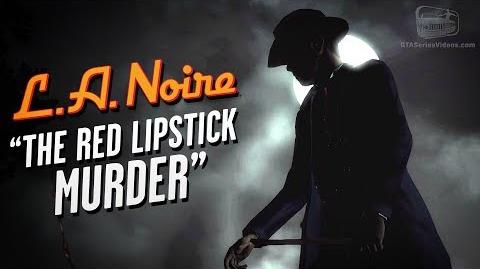 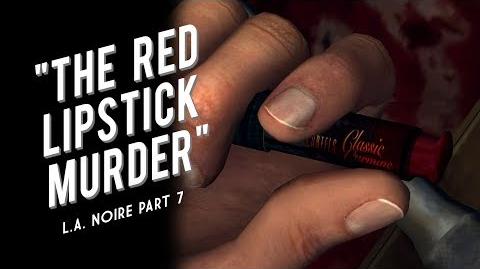