"I set her up, just like she sets me up."
―Albert Hammond

The Set Up is a Vice case in L.A. Noire.

In 1947, professional boxer Albert Hammond has won a fight that he was supposed to throw. His unexpected win cost his manager Carlo Arquero and several bookies, as well as Mickey Cohen, a large amount of money, putting his life in danger. Hammond flees immediately after the fight, and Cole Phelps with the help of his partner, Roy Earle, must find him before his double-crossed conspirators do.

Approaching the locker room, you see Hammond's manager, Carlo Arquero, banging on the door and screaming. After a brief discussion, Phelps kicks the door open.

"We had a goddamned arrangement!"
―Carlo Arquero

Hammond has escaped the room through a window and evaded capture, but Phelps is able to look around and find one clue inside his locker.

When Phelps leaves the locker room, he'll have a brief encounter with Mickey Cohen. Phelps then uses the nearby phone to trace the phone number found on the clue and gets the address for the Hotel El Mar. Earle mentions it's a flophouse. Since it is the only active lead, they go there.

Phelps speaks to the man behind the counter, Daniel Ullman, who will show you the guest register, which is filled with names of famous people who guests have used as aliases. Earle will say, "Okay. So look for prominent Tommies." Phelps points out Winston Churchill, the only British name in the register, then heads up to room 207 and looks around for clues.

Next they head to Candy Edwards' address, which turns out to be the Aleve Motel.

After arriving at the hotel, Phelps and Earle will talk to the receptionist. Phelps heads back outside and to the left, up the stairs to room 7. He'll hear a commotion as he approaches. He kicks down the door to see Carlo knock Candy unconscious. He'll have to fight Carlo. After the fight, Phelps searches for clues.

Phelps must also search Carlo's pocket for a Switchblade knife and a book containing names. After you find both clues and search his pockets, Candy Edwards regains consciousness.

As Phelps and Earle leave, Earle suggests tailing Candy Edwards to find out what she's up to.

As Phelps is tailing Candy on foot, he has to keep his distance and has to have good cover available. If he gets too close, she'll stop and turn around. Phelps will comment if he is about to lose trail of Candy. If he loses her or lets her spot him, this case is over. Candy's first stop will be to a bookmaker at Thrifty Liquor. Earle will meet Phelps there. Once inside, they speak to the bookie.

After a brief conversation, the bookie behind the counter will point out that Candy wrote something on the notebook near the telephone. Phelps will need to shade in the front page.

Next, Phelps will drive to the Examiner Drugstore to see if he can pick up the tail on Candy again.

When entering the drugstore, Earle will say that Mervin is an old acquaintance. Mervin tells the detectives that he helped Candy get a cab, and points them to the number by the phone.

Phelps calls the cab company for Candy's cab number, then talks to Mervin for the address to the next bookkeeper.

Upon arrival, Phelps will see Candy get in her cab. This will trigger a car tailing in which Phelps must follow Candy unseen. Driving in the wrong direction, crashing, using the siren, or stopping in the middle of the road will make you noticeable. The cab will eventually arrive at the Interstate Bus Depot.

Phelps follows Candy inside while Earle follows Hammond. She'll look at the bus schedule, then head to the bathroom. As Phelps approaches the bathroom, he hears a scream and a gunshot, kicking the door in to find Candy bleeding to death. Roy appears and says that Hammond got away. Phelps will search for clues in the bathroom.

The only clue to Hammond's whereabouts is the Egyptian Theatre movie ticket, prompting the detectives to check it out.

As Phelps and Earle arrive, dispatch notifies you that Candy's cause of death was stabbing, and that the gun was actually owned by her. Earle immediately puts it together: Carlo stabbed Candy with his knife. They head inside and hear Carlo trying to shoot Hammond. Two of Carlo's men will emerge from the seats and Phelps needs to kill them. After that, Carlo will come down in person and Phelps kills him. Hammond will emerge, and since Hammond didn't actually commit a crime, Phelps lets him go despite Earle's protests.

When questioned later about Edwards' death by Lieutenant Colmyer, Phelps will mention that it was a crime of passion - something between Edwards, Hammond, and his manager. When the Lieutenant asks if there has been any sign of Hammond, Earle will say no and suggest that he left town right after the fight. The Lieutenant tells Phelps and Earle that it's now Homicide's problem and congratulate the detectives.

If you interviewed Candy Edwards poorly, at the end of the case Lieutenant Colmyer will know that the case involves gambling rackets and will be angry about rumors that cops (namely Earle) are involved. When Earle refuses to give him any more information on the matter, he makes him do "venereal disease citations" until he learns to stop lying. When Phelps follows Earle's lead, Colmyer orders him to get his "uniform" from his locker and sends him back on "the street."

"According to my partner, we need a night off. There's a big boxing meet at the American Legion Stadium in Hollywood, and Roy is hyping the headline bout -- a young, much-favored Negro fighter taking on an older British opponent. It sounds to me like a foregone conclusion. Roy certainly seems sure of his investment in the young Negro." 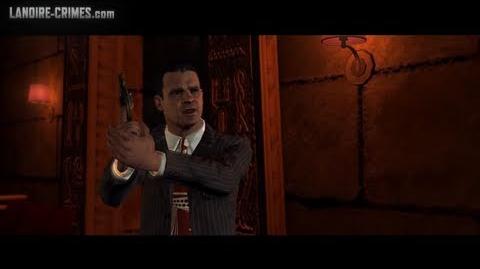 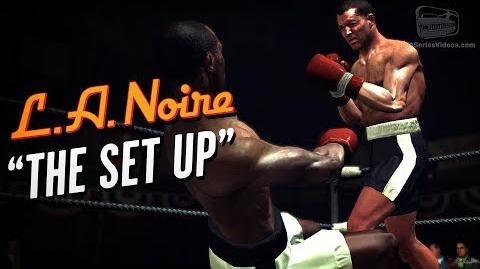 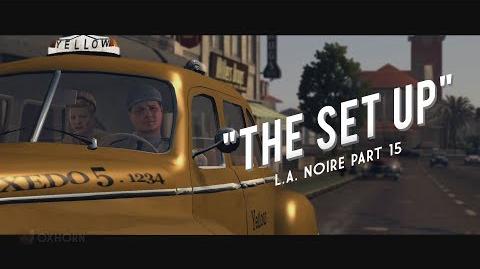 L.A. Noire Part 15 The Set Up
Commented Walkthrough
Retrieved from "https://lanoire.fandom.com/wiki/The_Set_Up?oldid=65903"
Community content is available under CC-BY-SA unless otherwise noted.