Start a Wiki
watch 03:00
What is The Silk Stocking Murder?
Do you like this video?

Alleyway off of Aliso St. between Los Angeles and Alameda Streets near City Hall, Downtown

The Silk Stocking Murder is a Homicide case in L.A. Noire.

The Silk Stocking case starts out at a Downtown cafe, where Captain James Donnelly informs Phelps and Galloway of a brutally murdered woman left naked in an alleyway off of Aliso St., near City Hall.

Upon arriving, Phelps and Galloway are greeted by a patrol officer, who then shows them to the body. The body has another message on it, like in the two previous cases. This one is cut up badly, but Phelps and Galloway argue whether it's a copycat murder or the original murderer still at large. Phelps soon finds a blood trail up the alleyway to a fire escape, then up the side and roof of a building to another set of roofs and eventually finds the victim's personal effects and library card along the way, as well as the victim's address and the fact that she was married. The player can leave the crime scene and go back to the Central Police Station for a briefing from the chief, or go to the address unearthed at the scene.

The Silk Stocking case starts out with a body of a woman left naked in an alleyway off of Aliso St. in Downtown.

Talk with the coroner, Malcolm Carruthers, then examine the body and surrounding area.

Finding the purse and library card automatically sends you back down to your car; if you haven't found all the clues, the "clue music" will still be playing and 3 you may need to retrace your steps. It is very easy to miss a clue during this particular search due to its length. Don't miss any of the "blood trail update" clues (wherein Cole remarks that the trail must be leading somewhere). To trigger the clue signal one must stick close to the trail.

After finding all the evidence you need, go to Antonia's residence for more information.

After gathering the clues, head back down and interview Mrs. Lapenti.

Now head to the husband's, Angel Maldonado's, apartment. (If you are pursuing the Auto Fanatic achievement, do not miss the rare Mercury Custom in the parking lot; if you don't get it now, odds are you will need to replay the case later in order to obtain it for the Achievement/Trophy). View the mailboxes to the right of the main entrance to get his apartment number, #304. Once in the apartment, Angel and his brother will brawl with Phelps and Galloway. After subduing the two, search the apartment.

After searching the apartment, canvass the neighbors.

The duo will get a call to report to the station immediately. If you do not, proceed to the El Dorado; you will get the call later in the case.

Meet the Captain downstairs in Technical Services. After a brief discussion and viewing of a poem, the Captain will tell you to go upstairs and interrogate the husband.

Now head to the El Dorado Bar. Pick up the envelope on the counter and examine the Divorce Papers. Question the bartender.

After talking to the bartender, walk out the back door of the bar to talk to an employee of the Just Picked Fruit Market. He'll leave some crates to the left of the door: inspect those crates.

Interview the fruit seller named Clem Feeney. If you have skipped the interrogation of Angel Maldonado at the Central Station, you will find the Fruit Market closed. You will need to use the gamewell on the corner. Interrogate Maldonado first and return to the Fruit Market.

After the interview there are clues to find:

Feeney will spy the detectives discovering the evidence and flee. Pursue in the car, allowing Galloway to shoot out the tires of Feeney's truck, and apprehend the suspect in Chinatown. Follow Feeney long enough and he will crash his car, also ending the pursuit.

"And I thought an invitation to breakfast with the Captain was just a friendly gesture. Our new assignment is a young Hispanic female, stripped and dumped in a manner reminiscent of both the Henry and Moller killings, just half a dozen blocks from City Hall. Galloway is still unconvinced about a link between the cases, and Captain Donelly has made his views on the matter abundantly clear." 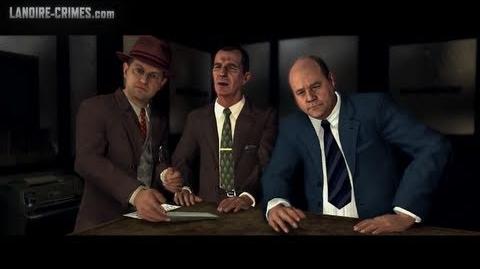 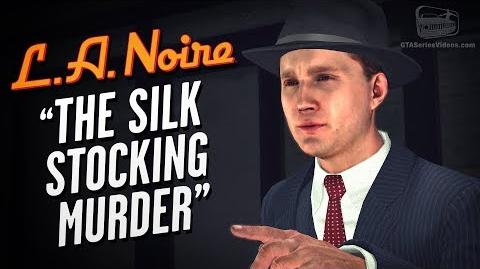 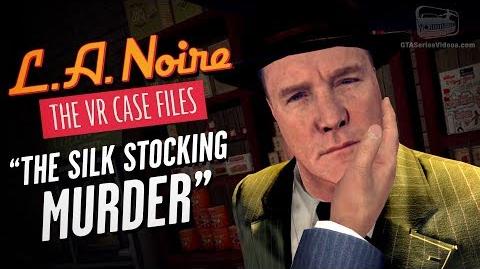 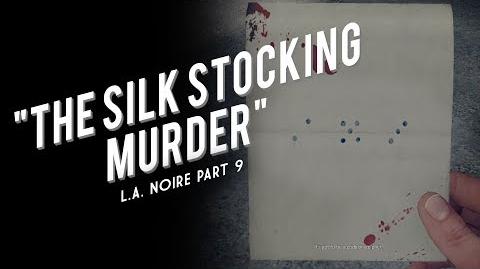 Retrieved from "https://lanoire.fandom.com/wiki/The_Silk_Stocking_Murder?oldid=66069"
Community content is available under CC-BY-SA unless otherwise noted.