View source
watch 02:35
What is The Studio Secretary Murder?
Do you like this video?
Play Sound

The Studio Secretary Murder is a Homicide case in L.A. Noire.

This mission, as with all cases, opens with a cutscene. Following this, head to the pawnbroker and speak to the man at the counter. He will hand you two rings to examine.

The wedding ring on the right has a hallmark whilst the engagement ring on the left has a maker's mark. You will automatically talk to the man again, and he will give you a false name and address left by the Black Dahlia killer, which Cole Phelps instantly identifies as false due to its relevance to Shelley, the author of the previously discovered poem excerpts.

Now head to the Railyard crime scene, where you'll meet Officer Clyde Hart. Speak to Nelson Gaines, the railway switchman, first. After he is done, speak to the coroner to get the victim's details and then search the green railroad car behind him for blood stains. Finally, search the body.

Although not clues, also examine the matchbox and slip of paper next to the handbag to discover two locations and update objectives.

Next, talk to John Ferdinand Jamison, who is sitting on some planks near Officer Hart. After a cutscene, you will get a new clue and begin questioning him.

After he is arrested, use the nearby gamewell to get the address for the nearest Levine's Liquor store. Visit Levine's before you go anywhere else, otherwise you will miss out on a small clue that is useful later on in the case.

Once you arrive, you will walk in and talk to the owner, Walter Robbins. He will lead you to the victim's bedroom.

Return to the front of the store to talk to Mr. Robbins.

Head to Mensch's Bar and talk to the bartender, who will tell you to talk to the patrons. Turn around and talk to Grosvenor McCaffrey, the man with the waistcoat and white shirt, who is sitting in a booth. Make sure you go to the bar BEFORE the bowling alley.

You'll only get the last question if you go to Mensch's Bar first. The last question may not appear on PC (Steam version), but does not count against the total questions.

Make sure that you drive the car. If your partner drives, you will not be able to go to the bowling alley first.

You'll get a message on the radio that the Captain has some concerns with the murders and needs to see you back at the station. Ignore this; go to the bowling alley for James Tiernan first. Inside, the old woman behind the counter, Florence Jenkins, will tell you that "Jimmy" is resetting pins in the back. Go through the door in the left wall of the building and cue the chase scene. There will be a Cisitalia Coupe waiting for you at the end of the foot chase; get in and chase him. Once caught, there is another cut scene of Jimmy being loaded into a paddywagon for a trip downtown. Now, you may proceed to the police station.

Back at the station, head downstairs and talk to the Captain. He'll tell you that there are some concerns about the previous arrests for the murders. He will give you a bit of new information and tell you to keep the info under your hat for now. You will also learn that the coroner has had to fire one of his men for being associated with Jamison.

Before leaving the station, use a phone to call in for McCaffrey's address if you haven't done so already.

Check the mailboxes for the apartment number. He is on the second floor in apartment six. Kick the door in.

A short cutscene will trigger when one of McCaffrey's neighbors, Elinor Hopkin, walks in. She notifies you of his location -- a pigeon coop above the apartment. Take the stairs to the roof.

Once on the roof, Grosvenor starts to run. Chase him down. You should be able to tackle him, but if he manages to evade you, he will eventually hide behind a wall and attack you, leading to a fistfight.

You must start with James Tiernan, so head on over to Interrogation Room 1.

Next, head on over to Interrogation Room 2 and interrogate McCaffrey.

Use the telephone to receive a clue about McCaffrey's criminal record.

Now head back over to Room 1, and talk to James Tiernan again.

Head back to Room 2 one last time and force McCaffrey to break.

"Yet another white female, forty years old, the body recovered in the rail freight depot on Santa Fe Avenue, East Downtown. But before our new investigation can even begin, we have old business to attend to. Personal effects belonging to one Deidre Moller were recently pawned for cash and it sounds as though the DA is desperate that something be done before the story hits the newspapers." 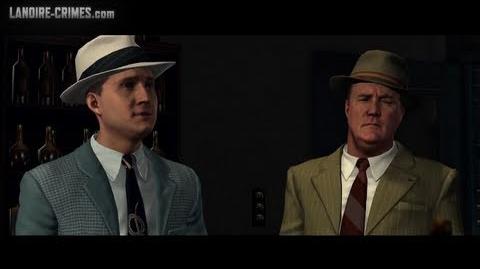 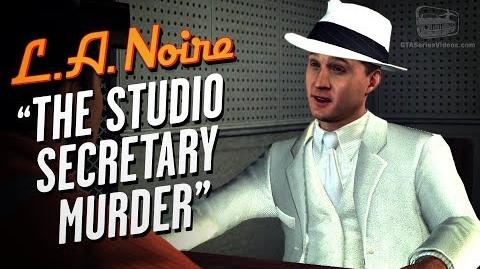 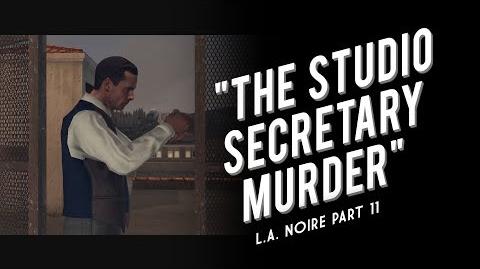