Start a Wiki
watch 02:50
What is The White Shoe Slaying?
Do you like this video?

The White Shoe Slaying is a Homicide case in L.A. Noire.

This case involves a lot of driving that you have to do yourself. Cumulative damage ($3,000+) from reckless driving is one of the most common causes for not obtaining a 5 star rating on this case. Drive slowly and carefully.

Detectives Cole Phelps and Rusty Galloway are briefed about a murder that occurred on Signal Hill during a heavy rainstorm over Los Angeles. The two head over to the crime scene and check in with Officer Andy Brown, who has secured the scene, before meeting with the L.A. County Coroner, Malcolm Carruthers, and Ray Pinker from Tech Services. Unfortunately, the heavy rain washed away most of the evidence. Carruthers tells Phelps and Galloway that the murder is similar to the others: blunt head trauma and strangling, however, there were no messages on the body and the victim was clothed.

Phelps will then be able to search the area for clues.

If Cole does NOT examine the laundry label on the victim, he will have to make a call to R&I and ask for "missing white females over the last forty eight hours." The dispatcher will return three names and their home addresses.

Before leaving, Officer Enrique Gonzales will bring Catherine Barton to the crime scene, as she thinks she can help with the investigation.

Once you're inside of the building, go to the back and talk to the owner. He'll pull out a Ledger of service numbers. Look up 'F1363' and tap on it to find the woman's address. You'll find out she was Mrs. Taraldsen. Go over to her home and see what her husband has to say.

Once you get to the home, you'll have to break the news to the husband,Lars Taraldsen, and their two young daughters Hanna and Lena. Rusty will tell them to wait while you investigate the place. Mr. Taraldsen will also tell you that he was waiting for his wife to get home from a party. You'll have to get several new clues here while investigating.

Before talking to Mr. Taraldsen, use the phone in the living room (located on the room divider between the couch and table). Have dispatch send someone to Bobby Ross' place to check on the husband's alibi and get the address.

The first thing Phelps will ask is what his wife's name is: Theresa.

Rusty will say you should go to the bar as it looks like she had her last drink there.

Once you're at the bar, go in and talk to the bartender, Benny Cluff. He'll know right away that this is about Theresa. He'll say he tried to call her husband, but the babysitter said he was out. You can ask him some questions now.

One of the "Vagrant Male Suspects" will be at the bar (Richard Bates). The barkeep will point him out, but Bates will try to flee. You'll have to chase him on foot as he starts to run.

Run after him with Rusty. You won't have to run for very long as a car will come along and almost hit Richard, and then he'll get into his truck. You'll have the car, so jump in. Rusty will shoot at him when you have clear shots lined up, so keep on him and hit his wheel wells when you can to bring him down. If you can't shoot out the tires, Bates will crash into a wall, get out, go down the stairs next to him to the alley below, and try to run away. The open alleys he runs through should give you an opportunity to fire a warning shot. If you fail to do either, Bates will eventually run into a dead end street and will then give up. Once you catch him, you'll get to ask him some questions.

After the interview is finished, use the gamewell across the street to put out an APB for the yellow cab and you will be informed to interview James Jessop, the sailor, at Central Station. Once you and Rusty return to your car (make sure you get into a police car), KGPL will inform you of the yellow cab's position, adding its location to your notebook. The information from the taxi driver is necessary for two questions in an upcoming interview to appear.

Now you'll need to catch the yellow cab (which is on your map). You'll need to manually pull him over. The vague location of him will be called in and put on your map every 30 seconds, if you look around the area it won't take long for him to appear as a red target on your minimap. It is also recommended that you do not play in black and white for this portion of the case, because of the obvious disadvantage when trying to find a yellow taxi. Put your siren on when you approach to trigger a cutscene and get some good info from the cabbie. Now drive to Central Station to interview Jessop.

Head back to the police station to interrogate Jessop. The desk sergeant will tell you he's in interview room 2. Go in and he'll say he heard about the murder on the radio and came down himself.

In order to get the last two questions, you must get the "Victim's movements" clue off the cab driver and branch the "Contact with victim" question with Jessop correctly.

After the interview, Officer Isaac Kelly will come up and say that he's got news on the hobo. He's been sighted and he's wanted in connection with two other female assaults. Rusty will mention a bus depot that you can check to confirm the sailor's story.

Head to the Bus Depot location next. On the way, Cole will have a patrol car pick up Lars; as for Bobby Ross, dispatch reports that his poker game ended around midnight.

At the bus depot, you'll get the name of the bus driver from last night. Turns out he's out driving the 74 route now. The route is now marked on the map. Drive the route counterclockwise until you find the bus, then pull it over by blocking the front left of it and talk to the driver, Frank Zeferelli. He'll confirm that the sailor was telling the truth, however it seems that Theresa was confused and lost. She was dropped off near a hobo camp.

If you begin to chase the bus then give up without actually catching it, Phelps will still mention the bus driver's statement in subsequent interrogations. The case report, however, will state that you ought to have interviewed the bus driver.

If you go to the camp before the Taraldsen Residence you will not find the hobo leader; instead, a hobo named Moss. Galloway will hint that they should come back later.

Rusty will call in for some backup as hobos hate cops. Head to the camp and you'll enter into a scene where the hobo leader will rally the men against you. Rusty shoots one with a shotgun, which makes most of them back off, but you're left to fight the leader hand-to-hand. After defeating him, watch the cutscene to learn his name. He's the disfigured man, Stuart Ackerman. Some officers will cart him off, leaving you to explore.

After the fight, you'll be able to look around for clues. Look in Ackerman's hut (straight ahead of you, Rusty is standing next to the door) for a newspaper on the desk and the following clues.

Phelps will notice that the coin purse is embroidered with the initials "T T" and inside is a ticket stub to the Crystal Ballroom. Time to go interrogate the bum. Cole will run down all the people they've arrested and it does seem like Stuart is the most likely.

There is a picture of Ackerman in his Marine uniform near the purse. It can be interacted with, but doesn't count as a clue. Behind his bed is a Marine P44 dungaree blouse. In the sidetable where the rope is found, there is a helmet with a Marine Corps helmet cover and next to the sink is a Marines duffel bag which is full.

At the station, go find him in Interview Room 1. Cole will comment on Stuart Ackerman's burns coming from his time in the war; being on flamethrower duty.

If Ackerman is interviewed poorly, Galloway and Phelps will be reprimanded by a very displeased Donnelly in his office.

"Just for once, I would like to be able to send my girls to school of a morning and not have to worry about what might befall them on the streets of this fair city. You two are doing nothing to allay a father's fears. Unsolved homicides weigh heavily on this department, young Phelps. Your latest case is an embarrassment, to me and your colleagues. A stint in blues rounding up pond life should renew your vigor. Apprehend anyone and everyone you find flouting the law. At the double, now."
―James Donnelly

After the reprimand, a "CASE FAILED" screen will promptly appear with a message comprised of only two words: "Interrogation Failed."

"Storms across the city last night and this morning, while a fourth woman was found dumped on top of Signal Hill. Captain Donnelly puts up a front of business as usual but he's stopped taking questions during morning briefings. The rest of the squad are talking about new evidence in the Dahila investigation, and the weather isn't the only thing starting to look uneasy.

During the drive while trying to locate the bus driver, Rusty and Phelps will initiate dialogue unique to that scene.

At the bus station, after receiving information about the route:

Fifth conversation: (Triggers once you've driven around for 15 minutes, or three in-game hours) 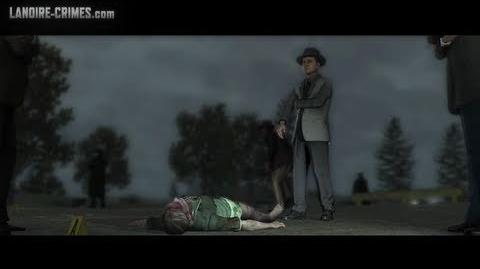 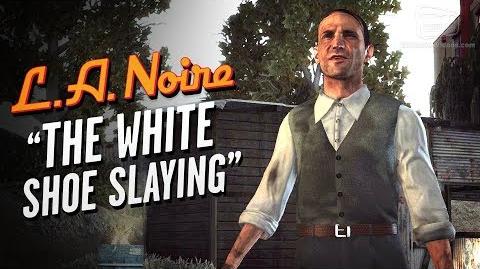 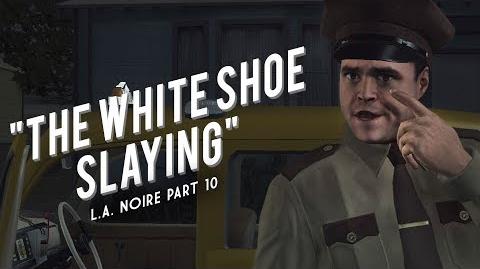 Retrieved from "https://lanoire.fandom.com/wiki/The_White_Shoe_Slaying?oldid=65961"
Community content is available under CC-BY-SA unless otherwise noted.