Start a Wiki
watch 02:10
The Vehicles of L.A. Noire
Do you like this video?

"A city on the verge of greatness. A new type of city, based not on the man, but on the automobile. The car - the symbol of freedom and vitality."
―Herschel Biggs

Vehicles play a major role in L.A. Noire. They are used as the primary means of transportation while moving through the city of Los Angeles. Vehicles are invaluable to Cole Phelps during his investigations, who uses them to travel quickly between locations and to chase criminals in high-speed pursuits. There are a total of 95 vehicles in the game, all of which are based on actual period models. Driving 5 will unlock the Achievement/Trophy "Auto Enthusiast", driving 40 will unlock "Auto Collector", and driving all 95 will unlock "Auto Fanatic".

Being a police officer, Phelps can commandeer any car that is on the street for the necessary practice of law at the player's discretion. This is similar to the basic concept of Rockstar 's Grand Theft Auto games, except no penalty is incurred for "stealing" a vehicle in this way in L.A. Noire.

The brown Chrysler Town and Country seen in the intro cutscene is most likely Phelps' personal vehicle. The different vehicles used at each desk are owned by the partners you work with; this is confirmed by Roy Earle when he claims that the Cadillac Series 62 Convertible is his own and that "you can't be seen slumming it in a Nash if you're in Vice" (referring to the Nash Super 600 owned by Rusty Galloway).

It is not obligatory to use the vehicle provided by the game; however, only police vehicles are equipped with radios for receiving dispatches. Additionally, Ralph Dunn, Roy Earle, Rusty Galloway, and Herschel Biggs will complain if you enter a vehicle that they feel is below their station, such as a truck or ambulance. They will say phrases like "You gotta be kidding me! We're driving this?" and "Great. How are we gonna look driving around in this thing, Cole?" and "What's wrong with a good old-fashioned black-and-white?" and "Fine, but if the Skipper sees us driving around in this, we're dead." Surprisingly enough, Stefan Bekowsky will never make any such comments, possibly due to him being a Traffic detective. In addition, Jack Kelso will also not make any such comments, possibly due to him being a private investigator. However, all partners and Jack Kelso will comment negatively on running over pedestrians, crashing into other vehicles, and knocking down city structures (lamp posts, traffic lights, etc.). Phelps will also make similar comments if that occurs when driving alone.

Vehicles are listed here by the model names and vehicle categories provided in L.A. Noire's "Vehicle Showroom", accessible from the "Extras" section of the main menu.

There are 25 total 2-Door vehicles.

There are 19 total 4-Door vehicles.

There are 8 total Sports vehicles.

There are 19 total Service vehicles.

There are 9 total Police vehicles.

There are 15 total Bonus vehicles. By reaching certain ranks, you will unlock the location of each vehicle (5 at a time). They will be represented by a "?" on the map screen. They will always be inside of garages with pale blue doors featuring the logo "Angel City Security" on the front. Unlike regular vehicles, which spawn randomly, these vehicles will always spawn exclusively in their assigned locations and can be obtained for driving at any time.

Vehicles listed here appear in the game, but are not drivable or do not count toward collecting the 95 vehicles. 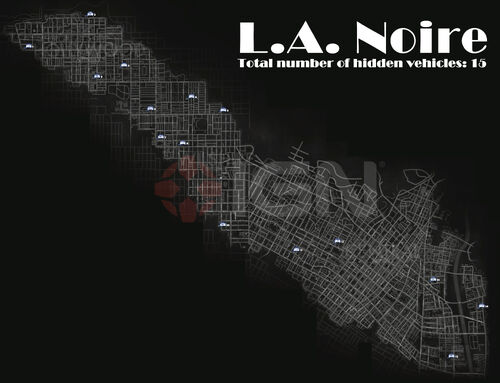 Retrieved from "https://lanoire.fandom.com/wiki/Vehicles?oldid=65756"
Community content is available under CC-BY-SA unless otherwise noted.